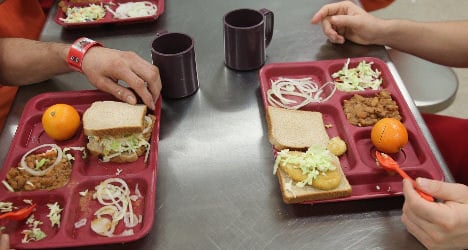 A French prison will not be forced to serve up halal meals after all. Photo: John Moore/AFP

A French court on Tuesday cancelled a November ruling ordering a prison to provide halal meals for Muslim prisoners, in the latest legal battle over an issue that has caused controversy in the secular republic.

The French government had sought to overturn the ruling by an administrative tribunal that argued that the Saint-Quentin-Fallavier jail in south-eastern France should provide the meals on the basis that failing to do so would violate Muslim prisoners' rights to practise their religion.

Many Muslims view France, which is officially a secular republic despite being overwhelmingly Catholic, as imposing its values on them and other religious minorities.

The issue of halal meat is a controversial topic in the country and has been used as a political football.

In the run-up to the 2012 presidential election, far-right National Front candidate Marine Le Pen launched a fierce row by claiming all meat from abattoirs in the Paris region was prepared using Islamic halal traditions, and that non-Muslim consumers in the capital were being misled.

And back in April 2013, the principal of a school near Paris was forced to backtrack after announcing that all pupils would be obliged to eat meat, and none would be allowed an exemption for religious reasons.

The debate has been mirrored by higher-profile disputes over the wearing of veils in France, which has one of the largest Muslim populations in Europe.

Any form of clothing linked to religious observance is banned from French state schools and since 2011 the wearing of full-face veils in public has been outlawed.