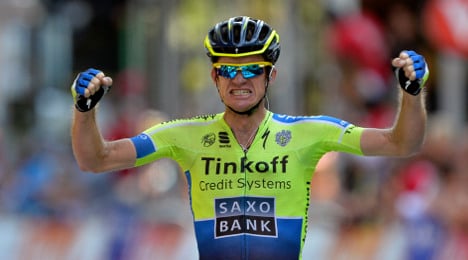 The wily veteran, who won two stages at the Giro d'Italia in May after coming back from a temporary doping suspension, outfoxed four escape companions to take the win following a mammoth 237.5km from Carcassonne to Bagneres-de-Luchon.

Frenchman Thomas Voeckler took second on the stage in a sprint finish ahead of Vasil Kiryienka of Belarus.

Further behind Italian Vincenzo Nibali held onto his race leader's yellow jersey, 4min 37sec ahead of Alejandro Valverde, as he came home in a small and elite group of his closest rivals.

One of the big losers on the day, though, was 23-year-old Frenchman Romain Bardet, who was dropped on the hors category Port de Bales climb and lost 1:50 to his rivals for a podium finish.

That promoted 24-year-old compatriot Thibaut Pinot from fourth to third with veteran 37-year-old Jean Christophe Peraud, another Frenchman, moving up from sixth to fourth.

Bardet dropped from third to fifth and is now 6:40 off Nibali but, more importantly having started the day 16sec ahead of Pinot, he now trails his compatriot by 1:36.

The other big loser amongst the leading pack was American Tejay Van Garderen who was dropped much earlier than Bardet and gave up around 3:30 to drop to more than four minutes off a podium spot.

Tour de France leader Vincenzo Nibala and his fellow riders head into the Pyrenees on Tuesday and despite a healthy lead of 4m37 seconds over second placed Alejandro Valverde, the Italian rider said he and his Astana teammates will need to take care over the coming days.

"The week that's coming is very important, the best thing will be to keep our concentration because there will be difficulties," said the 29-year-old Italian.

"We must be wary of breakaways because there will be people who are now a long way back in the standings who could get into a dangerous breakaway, so it could become difficult to manage the race and the support of the team will be very important."

Tuesday's 237.5km trek from Carcassonne to Bagneres-de-Luchon is the longest stage of the race and tackles the hors category Porte de Bales climb before heading into a speedy 20km descent to the finish.

Wednesday's stage from Saint-Gaudens is more than 100km shorter at 124.5km but that will merely push the pace up and it includes three first category climbs before the hors category summit finish at Saint-Lary.

It's the biggest danger for sprinters who will need to get home inside the time limit in order to continue.

If that isn't enough, Thursday's 145.5km stage from Pau tackles the two behemoths of the race, the Col du Tourmalet and the Hautacam summit finish.

With Nibali almost over the hill and out of sight, there is at least an intriguing battle for second with five riders separated by just 1:31.

VIDEO preview of stage below: