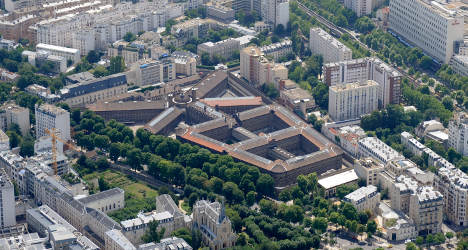 La Santé prison in Paris's 14th arrondissement is almost as famous for its long list of famous inmates as for its notoriously nasty conditions.

Yet the iconic star-shaped prison saw most of its remaining prisoners transferred to other facilities on Sunday which clears the way for multi-year renovations that will cost millions of Euros, French daily Le Figaro reported.

In its 147-year history the lock-up has held everyone from terrorist Carlos the Jackal and notorious playwright Jean Genet to legendary French bank robber Jacques Mesrine and ex-Panamanian dictator Manuel Noriega. It's also featured in popular French songs and literature.

Yet it’s become an emblem of the deeply troubled French prison system and further efforts for its reform.

SEE ALSO: 'France needs to change its response to crime' La Santé's medieval conditions were revealed in a book published in 2000 by Veronique Vasseur who bore witness to the shocking state of affairs during her seven years working as a doctor in the jail’s hospital.

Her book told of inmates so mentally ill they drank drain cleaner and swallowed forks. She told of the many men who suffered a variety of skin diseases because they were only able to shower twice per week.

Prisoners stuffed clothing into the cracks in their cell walls to keep out the rats, she wrote and reported how their mattresses were alive with lice and other bugs.

Though Vasseur's book led to a raucous public debate, which included threats against her life, the reform law it prompted was eventually set aside by conservative politicians. However, it was a key moment in the battle to reform France’s prison system and laid the groundwork for some of the changes now happening.

France’s prison system remains cracking at the seams due to overcrowding, but Justice Minister Christiane Taubira has launched a programme to renovate the country’s most notorious lock-ups.

La Santé, along with Les Baumettes in Marseille and Fleury-Mérogis in the Parisian suburbs, will be revamped as part of that €800 billion effort. Work at La Santé is expected to start in 2015 and be completed by 2019. In the meantime it will house 100 day release prisoners.

Before the renovations kick off the jail will be opened to the public for tours during France’s annual Heritage Days (Journées du Patrimoines) set for September 21-22.

It's a chance to see where Mesrine scaled the prison wall in 1978 in one of his violent jail breaks or the spot where the wife of another bank robber landed a helicopter and then proceeded to fly to freedom. They were two of only three escapes in the facility's history.