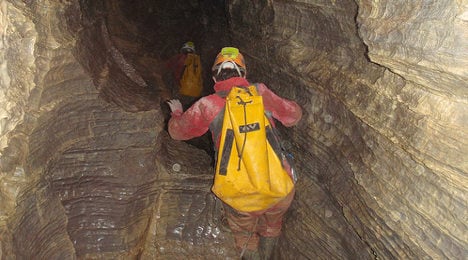 Eight caves have been reported missing after an expedition to the Cuves des Sassenages, near Grenoble, seen above in this file photo. Image: Delaere/FLickr
UPDATE at 18:46
The group of eight experienced men set out on Monday in the Cuves de Sassenage system near the city of Grenoble, but became trapped when rising river water blocked the entrance to the cave.
Local authorities launched the search operation around 9am on Tuesday and rescuers were trying enter to the Cuves in search of the cavers, French paper Dauphiné reported. Around 20 firefighters, police and members of a specialist cave rescue team were on site.
"The rescue operation will be tough and technical for the team," Thierry Larribe, a specialist advisor on cave rescues told Le Parisien. "It is a cave for tourists, but when it's flooded it can be dangerous and can trap people inside," he said.
The eight men departed for the expedition on Monday morning that meant to take 12 hours round trip but when they didn't return the alarm was raised.
Isère Prefecture couldn't immediately provide details to The Local on the nationality of the men, but promised updates as soon as they become available.
News reports said the were apparently experienced cavers and were not from the local area.
The cave, in the village of Sassenage, which stands around eight kilometres drive from the centre of Grenoble, is a popular tourist spot and is open for tours when the weather is good. A recording on the voicemail at the cave's administrative offices reported the grotto was closed on Tuesday due to flooding.
In 2002 rising water trapped a group of 22 school children and three adult chaperones in the cave overnight. They were rescued the next day and were unharmed.
In addition to the part of the cave that is open to the general public, there are portions that are accessible only to cavers and only by permit.