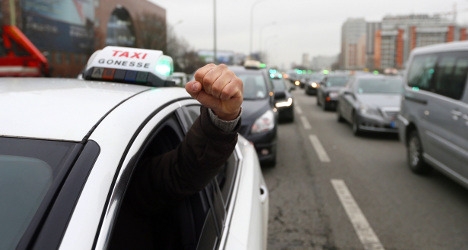 The wat between traditional PAris taxi drivers and private minicab firms shows no sign of being resolved. Photo: AFP

First it was the traditional taxi drivers in Paris who protested against what they saw as unfair competition from private hire minicabs (Véhicle de Tourisme avec Chauffeurs).

Now the tide has turned with minicab drivers set to demonstrate on Monday against a proposed government law aimed at ending the increasingly bitter battle between the two versions of taxis.

On Monday drivers from the private hire car firms like Snapcar, Chauffeur-privé, LeCab, Allocab et Supershuttle, will descend on Place Vauban in the seventh arrondissement to demonstrate.

The VTC drivers are angry at various amendments in a new law, that has already been given the green light by the National Assembly,  that was put forward after taxi drivers had complained of unfair competition from firms like Uber.

But now it is the VTC drivers who say the new rules will leave them at a disadvantage and threaten their livelihoods.

One amendment forces VTC drivers to return to a private garage or to the company’s office in between each journey, meaning they can’t park up by the side of the road.

The law also bars them from using a geo-localisation system on smartphones, like the system used by Uber, whereas taxi drivers will be able to use the technology in future.

Hascoet said the law will simply lead to increased costs for the VTC companies.

Taxi driver unions on the other hand defended the new law.

“Parking on public roads is reserved only for taxi drives. That’s already in the law, but VTC drivers don’t respect it.

The new law, that was inspired by a report by MP Thomas Thévenoud, will be discussed by the Senate this week