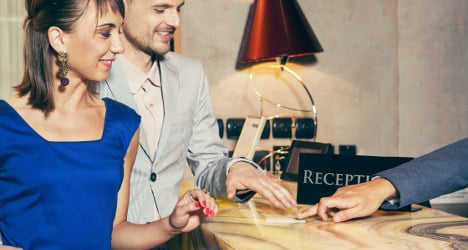 What would you pay for your hotel in Paris? Photo:Shutterstock

Many tourists who have visited Paris over the years will no doubt have complained about the cost of their hotel, but over the next couple of weeks, some guests in the City of Light will not be able to moan.

Five hotels in the capital are offering guests the chance to “pay what they want” based on how good they thought the service was.

“I am not worried about it at all. I trust people,” Si-Zyad Si Hochine, the owner of the Grand Hotel Français, one of the hotels taking part in the initiative told The Local.

“Ninety-nine percent of the guests who stay in the hotel will pay the correct price. They will know what it’s worth. And they recognise when they get they get good service,” Si Hochine said.

However the initiative will not be open to all of the hundreds of thousands of visitors who wll pour into the French capital over the next two weeks.

Tourists who want to make the most of the offer have until August 10th and they need to book their room through the website www.payezcequevousvoulez.net (Pay what you want)

“The idea is to give back a voice to clients as well as to find the right price. How much are they willing to pay for the product we offer them,” Aldric Duval, president of the Tour d’Auvergne hotel, which is also taking part in the scheme, the Le Parisien.

The “pay what you want” initiatives have been tried out in other areas, notably restaurants, where diners have been given the chance to show what they thought of the grub by stumping up the amount they were willing to pay.

However this kind of payment system is unlikely to become the norm in future, at least in the hotel industry, but we may see it introduced over short periods of time.

“We are thinking of creating a group of hotels that offer these kind of promotions more regularly," said the Grand Hotel Française’s, Si Hochine. “But it wouldn’t be possible for it to be introduced permanently.”

Bruno Belbézier, who teaches marketing at the ISEG business school in France, said: “The risk remains that the consumer will profit from the situation to pay the least possible. It’s called the bargain effect.”

But Belbézier notes that studies show that in fact sales figures for companies who launch these kind of schemes actually go up, unless however payments are handled over the internet, where the lack of personal interaction, takes away the pressure on the customer to stump up more.

"The system could work over short periods, but if it becomes generalised it would only confuse the customer," Belbézier added.