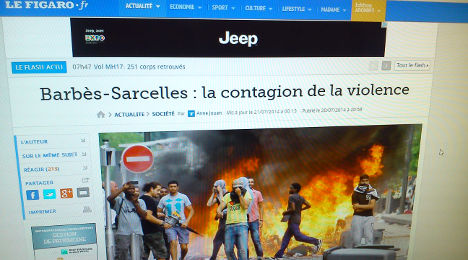 Internet forums and news websites in France have been overrun by comments expressing hatred towards Israel over its offensive in Gaza. Photo: Le Figaro screengrab

The bombardment by land, sea and air that has killed at least 425 Palestinians has enflamed tensions far afield from the Middle East, especially in France with its large Muslim and Jewish communities.

Paris protests in support of Gaza residents have degenerated into violence on several occasions.

"As soon as you talk about Israel, it crystallises all passions, with up to 20,000 or 30,000 comments sometimes after an article, of which we will only let five to 10 percent through," said David Corchia, head of Concileo, a firm of moderators that counts the dailies Le Figaro and Liberation as clients.

Helped by software that automatically reports suspect keywords, online moderators can filter comments in accordance with special legal requirements in France as well as client requests. Those laws ban racist, anti-Semitic or discriminatory messages among others, as well calls for violence.

The moderators have little time to decide whether to let a remark through,and generally block 25 to 40 percent of comments.

But on the subject of the Israeli-Palestinian conflict, the rejection rate can reach 95 percent.

"There are three times as many comments than normal, all linked to the Israeli-Palestinian conflict," said Jeremie Mani, head of Netino, which looks after the websites of the Le Monde daily, Europe 1 radio and major French television channels. 'Sickening content'

Netino's 250 moderators, most of them based in Madagascar, deal with tens of millions of comments every month.

"This sickening content is peculiar to this conflict. The war in Syria does not trigger these kinds of comments.

"On the pro-Palestinian side, identical messages are posted on dozens of sites. On the pro-Israeli side, there are fewer messages but they are better organised," he said.

"But it's a dialogue of the deaf. Neutral netizens… are really annoyed to see their space for dialogue monopolised by this issue."

"On an article about the Tour de France, after four comments it's about Gaza," said Mani.

"On one story about salmon fishing, I saw a comment saying: 'Stop talking about this, the problem is there are too many Jews'.

"Without any moderation, these hate messages would invade everything, particularly as they quickly breed followers."

Media sites are not the only platforms that fall victim to violent messages. Public spaces on social networks such as the Facebook pages of famous people are targeted, and those comments are first published before they can be removed. 'Psychologically' demanding And while the current Israeli-Palestinian conflict may generate a large amount of vitriol, other events of a certain nature do, too.

Corchia said that when a teacher was stabbed to death by a student's mother in front of her young pupils earlier this month, racist messages began pouring in as soon as the foreign-sounding name of the assailant was revealed.

And when a former local election candidate for the far-right was given a nine-month jail sentence this week for comparing France's black justice minister, Christiane Taubira, to a monkey, Corchia said that on one story, moderators were only able to publish 500 comments out of 10,000.

"We watch for word associations. For example, any allusion to World War II is eliminated," he said.

Pierre Duhau-Laurent, marketing director for Atchik Services, which moderates the websites of the French presidency and the Le Parisien daily, said "organised propaganda" was currently sweeping social networks at night.

"Israeli Prime Minister Benjamin Netanyahu has bought sponsored tweets for his messages. And Hamas's response is just as organised," he said.

"Calls for murder are our daily life. It's sometimes hard psychologically for our moderators."