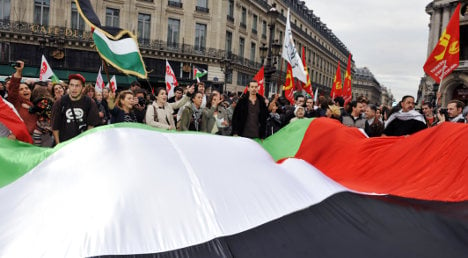 "What happened in Paris – unacceptable unrest – justifies, all the more, the brave choice by the interior ministry to ban a demonstration," Valls said on Sunday, after both rallies ended in running street battles between police and rioters.

However organises of Saturday’s protest in Paris remain defiant and have called for those opposed to Israel’s assault on Gaza to gather at Place de la Republique this coming Saturday, for what promises to be the biggest demo so far.

"The situation is exactly the same. We will be demonstrating," one the organisers from the far-left New Capitalist Party told Le Parisien newspaper.

Despite the clear threat of disorder Pierre Tartakowsky, the president of France’s “Ligue des droits de l’Homme (LDH)” (League of Human Rights) says “Freedom must prevail” and Saturday's demo must be allowed to go ahead. Tartakowsky: “It was a big mistake by the government to ban the march. By forbidding it, it opened the way for trouble and for radicalisation. It encouraged anti-Semitism. But on the other hand if it had allowed the protest to go ahead it would have strengthened the democratic political debate.

“It is totally legitimate today that events in Gaza are something the public see as, at the least problematic and certainly tragic. We have an army that is violating every international rule of law and is even targeting women and children. It is normal that the public in France want to show that they refuse to allow that to happen.

“You can’t just say these demonstrators are anti-Semitic or that the protest is a risk. Every demonstration is a risk. It is the government’s responsibility to keep the peace at these demos.

“One question that remains is why when there were 600 policemen in Sarcelles on Sunday, were around 100 hooligans allowed to go on the rampage.

“We had many protests all around France on Saturday and Sunday that were granted permission to take place and that remained peaceful.

“I am sure the government will allow the next protest to go ahead. They can’t forbid every demonstration. On Saturday there will likely be several prominent politicians and the main CGT union has called for members to join the demo, as has our organisation.

“It is not legitimate to ban it, because it has not been organised on the basis of racism or anti-Semitism. Freedom must prevail.”

“This is a chance for the government to change its stance. If they don’t it’s likely that things will be very tense and I am afraid we could see more problems.

“For a start banning these protests doesn’t fit with the official position of our country. We fully support the right for Palestine to be a free state and to fly its flag at the UN.

“Of course we are against anti-Semitism. What we have to do is separate anti-Semitism from criticism of the state of Israel. It is a country, and like any other, it must be criticised [when it does something wrong]."