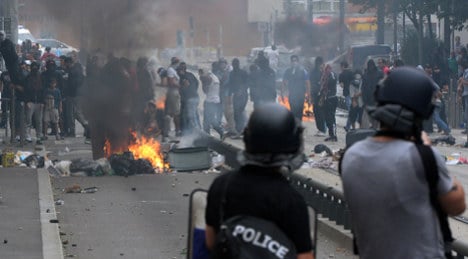 Police in Sarcelles face-off with rioters who targeted the Jewish community in Sarcelles, to the north of Paris. Photo: AFP

Shattered glass, a handful of burned out businesses and the presence of dozens of riot police were the clues pointing to the destruction left behind by a mob of pro-Palestinian protesters who turned on the Jewish community in the northern Parisian suburb of Sarcelles on Sunday.

What began as a protest against Israel’s bombing and ground offensive in Gaza quickly turned into a rampage with the so-called "Little Jerusalem" neighborhood in working class Sarcelles as the number one target for rioters. It is one of the centres of France’s Jewish population, which at some 500,000 is the third largest in the world behind Israel and the United States.

(People gather outside a pharmacy on Monday that was destroyed in the riot. Photo: The Local/Joshua Melvin)

In addition to the cars and waste bins set ablaze, several Jewish business were torched, including the Naouri kosher market which was the target of a flash-bang grenade attack in 2012. Rioters also tried to approach a synagogue, before being repelled by riot police.

At least one unconfirmed report stated the building was suffered minor flame damage from a petrol bomb.

As the rioters rampaged through Sarcelles into the early evening, witnesses told The Local they'd heard chants of "Israel, murderers!" and "Hitler for president!"

For the French government, Sunday's violence was clearly an attack on the country's Jews. "Attacking a synagogue, a kosher supermarket, it's pure and simple anti-Semitism, racism," said PM Manuel Valls.

The riot was the third time in eight days a pro-Palestinian demo has degenerated into violence. The first march on July 13th saw protesters attempt to storm two synagogues in Paris, before being beaten back, by riot police and Jewish militants.

(Police guarded the burned-out remains of a pharmacy attacked in the riots. Photo: The Local)

The repeat of the violence left some members of the anxious and concerned Jewish community in Sarcelles considering leaving France.

“We’ve been thinking about moving to Israel for some time now,” Daniel Ullmann, 58, a teacher told The Local. “There is a part of France that is very xenophobic. There’s a part of the population that has no liking for foreigners.”

As he spoke to The Local a passerby shouted at him: “Go back to Israel!”, which drew only a sad shrug and knowing grimace from Ullmann.

Jewish people in Sarcelles like Ullman are concerned about what could happen next.

"We don't know if they are coming back. The troublemakers sleep during the day," said Ullmann. "We'll find out tonight."

He said for a long time life has been tranquil between Jews and the other groups that make up the diverse population of town, including its large Muslim community. But now Ullman feels it has once again become a “time of pogroms” where “Jews had better stay at home", unless they’re looking for trouble.

'Young people being manipulated into violence'

Sarcelles includes several poor neighbourhoods and sits to the north of a string of Parisian towns that make up one of the largest concentrations of poverty in the country.

Some observers in Sarcelles told The Local the anti-Semitic violence in France is being fanned by the country’s dire economic situation – with unemployment rates among young people hovering at 25 percent – as well as by Islamists.

“It’s young people, who’ve got no work and aren’t in school, they are the ones being manipulated into this kind of violence,” said journalist André Nahum, 92, a retired doctor and a long-time member of the Sarcelles Jewish community. “It’s Islamists who are at the source of these problems, not just here, but around the world.”

He said leaving Sarcelles for Israel or elsewhere isn’t a solution because the problem is global.

“You stay, you fight,” Nahum said. “Otherwise you are just handing the country over to them.”

The anger the deaths in Gaza has provoked among the Muslim population in Paris’s suburbs is raging, but in Sarcelles a Muslim man who would give only his name as Jamel said Sunday's attacks were wrong and were not perpetrated by local Muslims, who the 39-year-old firefighter says get along with the Jewish community. (The Naouri kosher market, which was the target of a hand grenade attack in 2012, was torched by pro-Palestinian protesters on Sunday. Photo: The Local/Joshua Melvin)

“It’s scary. We live in a civilized country,” he said while standing outside the remains of a pharmacy that was torched in the riots. “But it’s wrong, it’s wrong for kids to be killed by Israel. What are they going to do against the Israeli army? Throw rocks at them?”

Marc Knobel, from Jewish umbrella group CRIF also believes it's a mistake to blame the recent rise in anti-Semitism, sparked by the latest Israeli assaulty on Gaza, on Muslims in France.

Instead Knobel says the marginalization and alienation from mainstream French society has led to some youths in the poorer suburbs of French cities like Sarcelles, to identify themselves with the struggle of the Palestinians against Israel.

"It's difficult to determine who are the perpetrators of these anti-Semitic acts in terms of their religion," Knobel told The Local previously.

"The only thing we can say is that they are more often than not from poor suburbs in France and have been victims of racism and discrimination themselves. So they associate themselves with Palestinians and develop anti-Zionist and anti-Semitic views. Some are Muslims, some are not."

Whatever the cause and whoever the perpetrators are, the violence is forcing many French Jews, like Daniel Ullmann, to think about packing up and leaving France.

In May The Local reported that figures revealed 2014 could see a record number of Jews in France leaving for Israel. As many as 5,000 could depart by the end of the year. That has not happened since 1948, according to the Jewish Agency for Israel.