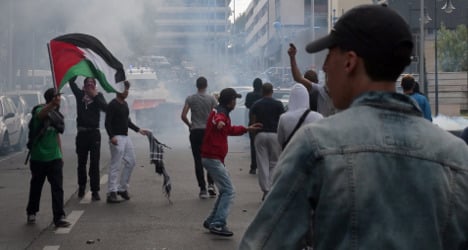 Protesters clash with riot police in Sarcelles, a suburb north of Paris during a demo to denounce Israel's military campaign in Gaza. Photo: Omar Beyacoub/AFP

A rally in the Paris suburb town of Sarcelles that had also initially been banned ended in chaos as several cars were burnt or vandalised, shops were looted and young protesters lit firecrackers and smoke bombs.

Early Sunday evening, tensions were still high in the town, with riot police blocking access to the local synagogue, where a group of young vigilantes stood armed with clubs and iron bars – one of them flying an Israeli flag.

The violence echoed similar scenes at a banned pro-Palestinian rally in the cente of Paris on Saturday afternoon.

As the evening wore on in Sarcelles, looters then began raiding shops, wrecking a funeral home and destroying its front window as several protesters shouted: "Fuck Israel!".

Others raided a drugstore which caught fire. Young girls grabbed baby milk inside.

"We're going to get the cash register," one person shouted, his voice drowned by the noise of a police helicopter overhead and the alarm of a nearby pizzeria.

Security forces then fired rubber bullets in the direction of the looters as police helicopters buzzed overhead.

At least 13 rioters had been arrested by the early evening, and four policemen had been hospitalised with several others injured. There were also reports of journalists being attacked by the rioters.

Le Figaro newspaper also reported that a molotov cocktail had been thrown at a synagogue in the area, which was being garded by police. The makeshift incendiary device exploded next to the building but did not set it alight, the newspaper reported.

"The atmosphere is very tense, we are waiting for reinforcements from the gendarmes," one police officer told Le Figaro.

In 2012 Sarcelles, sometimes nicknamed "little Jerusalem" for its large community of Sephardic Jews, was the scene of an anti-Semitic attack on a Jewish grocery store when a grenade was thrown at the shop.

The video below uploaded to YouTube shows protesters running through the streets armed with stickss and bars, shouting "Israel murderers".

The decision to ban the rallies in Paris and Sarcelles were taken out of fear of unrest and amid concern that the Jewish community would be targeted after protesters last weekend tried to storm two synagogues in the French capital.

But the move was met with controversy, particularly after protests that were allowed to take place over the weekend in other cities went ahead peacefully

Organisers have defiantly called for another rally in the French capital on Saturday, starting at 1300 GMT in the central Republic Square.

The Israeli offensive has stoked passions in France, which has the largest Muslim population in western Europe as well as a 500,000-strong Jewish community.

On Sunday France's prime minister defended a controversial decision to ban a pro-Palestinian demonstration in Paris that went ahead anyway and descended into violence.

The rally on Saturday in a northern district of the French capital was initially peaceful, but scores of men later clashed with riot police, throwing stones and bottles at security forces who responded with tear gas, sending locals and tourists scurrying.

"What happened again yesterday in Paris – unacceptable unrest – justifies all the more the brave choice by the interior ministry to ban a demonstration," Prime Minister Manuel Valls said Sunday.

The crisis in Gaza has highlighted divisions within French society — a Jewish community increasingly concerned over anti-Semitism, French people of north African descent who include a growing radical Islamic fringe, and far-left activists whose opposition to Israeli policies sometimes verges on anti-Semitism.

Speaking as he commemorated the anniversary of the Vel' d'Hiv Roundup – a mass arrest of Jews in Paris on July 16 and 17, 1942 – Valls warned of "a new form of anti-Semitism".

He said it was spreading "on the Internet, on networks, in working class areas, among young people who are often aimless, who have no awareness of history, who hide their 'hatred of the Jews' behind the facade of anti-Zionism and behind hatred of the Israeli state."

President Francois Hollande also hit out at anti-Semitism and racism on Sunday, saying it would not be tolerated.

"The Republic is about being able to live together, to look at our history and at the same time to always be ready to defend democratic values, not to be influenced by arguments that are too far away from here to be imported, not to be swept away by global shock waves," he said.

Two further protests are planned this week in Paris on Wednesday and Saturday. Authorities will have to decide whether they allow them to go ahead.