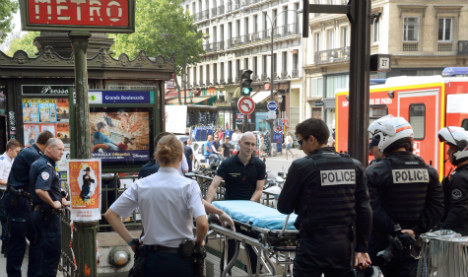 Coin dealer Claude Burgan said he had been opening his shop after lunch when he was shoved to the ground and hit in the head by a thief who pushed his way in.

Burgan, his head and shirt still wet with blood following the incident, told AFP he managed to lock the thief in the boutique.

"To escape he had to shoot at least twice into the glass window. He left with two trays of gold pieces worth about 100,000 euros", said Burgan, standing on shards of glass outside the boutique.

The thief then fled into the nearby Grands Boulevards metro station in a crowded, tourist-heavy area, where police officers noticed him and began their pursuit, leading to an exchange of fire.

"The criminal took out his gun in the train," said a witness who said he heard at least 20 shots during the exchange with police.

Police said the man was apprehended after being shot in the arm during the shoot-out. A spokesman said he was not in critical condition.

The suspect was already known to law enforcement for prior armed robberies, he said.