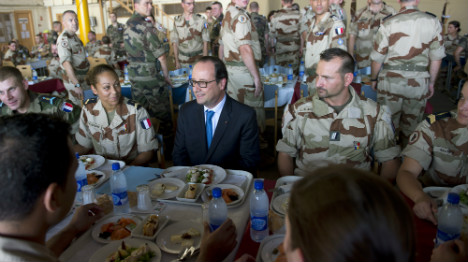 The operation, which will be based in the Chadian capital N'Djamena, will involve some 3,000 French troops and operate in the restive Sahel region on the southern edge of the Sahara where Islamist rebels have staged multiple uprisings and incursions.

Operation Barkhane takes over from the French military mission in Mali, which had wrested control from Islamists who had overrun the north of the former French colony.

That mission is being wound up, but 1,000 troops will remain in Mali's north. The rest will cover the states of Burkina Faso, Chad, Mali, Mauritania and Niger.

Hollande has said the Barkhane force will will allow for a "rapid and efficient intervention in the event of a crisis" in the region.

France also has some 2,000 peacekeepers deployed in the Central African Republic, another former French colony riven by religious and ethnic conflict.

Hollande visited Niger and Ivory Coast earlier in the week, inspecting French military installations and meeting with fellow heads of state on security and development issues.