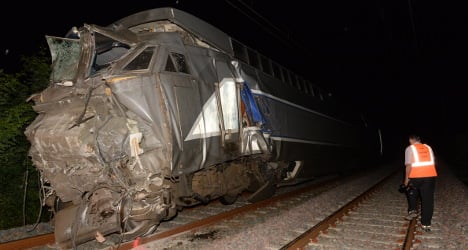 The rear of a TGV train after it was hit by a regional TER train in south western France on Thursday. Photo: Mehdi Fedouach/AFP

The signalling system in the in the area where a high speed TGV train collided with a regional TER in south western France on Thursday,  was undergoing maintenance, according to France's transport chief.

The two trains collided near the Denguin (Pyrenees-Atlantiques) at the foot of the Pyrenees, around 17km from the city of Pau at around 5.30pm on the line between Pau and Bayonne.

Authorities said at least 40 passengers were injured, three of them "extremely seriously". Some of them were airlifted to hospital.

After the accident junior transport minister Frederic Culliver said the signalling system for the tracks in the region was undergoing maintenance at the time of the crash.

However Culliver added: "There is nothing to confirm or exclude a link between the maintenance and the crash."

Culliver tried to assure the public that checks would made across the rail network on similar signalling systems.

The TGV travelling from Tarbes to Paris, was carrying 178 passengers was hit by the regional TER train, with 60 passengers on board, from the rear, Sud Ouest newspaper reported.

The TGV had apparently stopped for a short while on the line and was just pulling away when the collision occured.

The collision happened at low speed but the crash was nonetheless "violent" according to one local journalist at the scene.

He told French media that a signal had been stuck on red, causing the TGV to come to a halt. However Krakovitch said an investigation needed to explain why the TER was still travelling at 90km/h.

"Was it a technical error, combined with a human error? Nothing allows us to say for certain," he said. "

Krakovitch said there would be an independent investigation as well as one carried out by the SNCF to determine the cause of the accident.

Thursday's collision comes just over a year after the Bretigny rail crash, just south of Paris, in which seven people died and scores were left injured.

The crash highlighted the poor state of France's rail network with the blame being placed on poor maintenance checks. A report released on the anniversiary of the disaster claimed the crash was just a question of time, given the poor state of the tracks.

But they also reported that inspections in the area of the crash near the station of Bretigny-sur-Orge, south of Paris, had revealed around 100 identifiable defects.

These included numerous joints that were either missing or too loose. Several of the faults had been known for up to about eight months prior to the accident without having been rectified. One crack in a metal piece had first been registered in 2008.

"The principal cause (of the accident) was a shortfall in the quality of maintenance," public prosecutor Eric Lallement told a press conference.