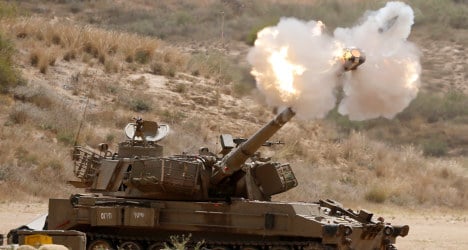 Egypt-mediated talks to end the escalating Gaza Strip war have faltered, with Hamas insisting on a comprehensive ceasefire that would end the Israeli blockade of the coastal enclave, Palestinian officials said.

Abbas wants France to lobby Hamas allies Qatar and Turkey to pressure the militants into accepting the truce, Fabius told reporters after meeting the Palestinian leader in Cairo.

A senior Hamas official told AFP the Islamist movement would not accept any ceasefire that did not guarantee opening border crossings to the besieged enclave.

Egyptian President Abdel Fattah al-Sisi, who overthrew the Muslim Brotherhood from power last year, has sought to isolate Hamas allies and initially demanded that the militants unconditionally accept its truce to end the 11-day war, as Israel already had.

Cairo has worked instead to bolster the role of Abbas — its ally based in the West Bank and rival to Hamas — in reaching a deal to end the conflict which has killed more than 260 Palestinians since July 8th.

Egypt has also rejected demands by Hamas to involve Turkey and Qatar — both regional rivals to Egypt's new government — in the process, Palestinian officials said.

"We demand a complete agreement and the end of the siege. The (Egyptians) respond that Israel can't accept this," said the senior Hamas official.

Abbas has in turn asked for Fabius's help in lobbying Qatar and Turkey to influence Hamas. The two met on Friday at Cairo airport before Abbas left for Turkey.

"He (Abbas) asked me to contact the Turks and Qataris with whom we have good relations, because they themselves can exert a particular influence on Hamas," Fabius said.

"There can be influences that I hope can let Hamas accept the ceasefire that it has refused," Fabius said, adding that he would call both countries' governments to press the issue.

The senior Hamas official said the militants, who rejected an initial Egypt-proposed truce they said ignored their demands, will not back down even as Israel launched a ground incursion into Gaza overnight on Thursday.

Hamas also insists that Israel release Palestinian prisoners it had freed but rearrested and lift its siege of Gaza, Ahmed told AFP.

Egypt's foreign ministry has condemned the ground incursion but also lashed out at Hamas, saying the Islamist movement could have saved dozens of lives had it accepted Cairo's proposal.

According to analysts, Sisi has sought to corner Hamas, an ally of the Muslim Brotherhood in Gaza, and deny it a victory in the conflict with Israel.

But Hamas's rejection of an unconditional ceasefire has forced Cairo to deal with the movement in an effort to defuse the escalating war at its doorstep.

Egypt, which has a peace treaty with Israel, shares borders with both the Jewish state and Gaza.

Israel has blockaded the coastal strip since Gaza militants kidnapped an Israeli soldier in 2006, and Hamas later expelled Abbas's Fatah party from the enclave in a week of bloody clashes.

Abbas and Hamas have agreed on a unity government of technocrats to end their seven-year split, but the deal has faltered over funding and power-sharing disputes.