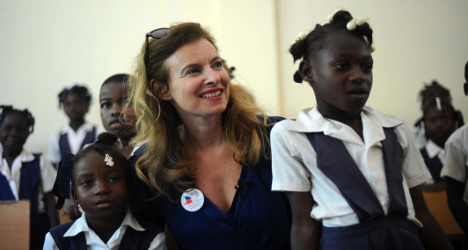 A bachelor as France's head of state might make some traditionalists feel uncomfortable, but President François Hollande’s lack of an official partner will certainly be cheaper for the French public.

Trierweiler’s roughly 20 months serving as the country’s unofficial first lady, (the title that doesn’t actually exist in France), has proven to be pretty costly. A report from France’s top auditor, the Cours des Comptes, released this week shows that taxpayers footed a €481,000 bill for Trierweiler in 2013.

The bulk of the expense went on paying for her staff of five that helped her with her various projects, including humanitarian efforts. There was also a four-person security detail charged with protecting her.

The salaries for the staff members came to €396,000 for the year and that apparently didn't include the cost of her bodyguards, which was not detailed by the Cours des Comptes.

French taxpayers also footed the €85,000 bill for her travel expenses last year. She was traveling both as a representative of the state and was making various appearances of a “humanitarian nature.”

It’s not clear yet what the bill will be for 2014, should be a lot less given the fact the couple officially broke up at the end of January, following the revelations from tabloid magazine Closer that Hollande was having an affair with actress Julie Gayet.

Unless that is the rumours that Trierweiler, on hearing of Hollande's infidelity, went on a rampage in the Elysée Palace, smashing €3 million worth of vases, clocks and paintings, all belonging to the Mobilier National (an institution under the culture ministry that is in charge of furnishings in state buildings).

Those allegations were however rubbished by the Mobilier National. After the very public break-up Trierweiler's staff were shifted to other jobs at the Palace or sent back to the ministry they worked for previously. It’s a rather unusual way to lose one’s job.

The scandal drew global attention and prompted a few jokes about the stereotypes of the French propensity for infidelity. The affair also came as quite shock as most had not pictured Hollande, nicknamed flamby after a custard like dessert, as the lothario type.

But the affair, revealed in a series of photos showing a helmet-wearing Hollande being transported to a love nest on the back a scooter driven by a security guard also raised serious questions in France.

People were at first concerned by the apparent lack of security around the president. But the bigger issue was the rupture from the French press’s long established self-censorship about its top leaders’ private lives.

Hollande invoked respect of his privacy when providing his first public comments on the scandal at a major press conference in January, that was to be the launch of his policies to get France’s economy out of the doldrums. The French press did not pressure him to reveal all about the affair.

According to the latest tabloid reports, Hollande and Gayet are still very much together and she’s even apparently been putting pressure on him to make their relationship official. There’s no word if that would entitle her to a staff and bodyguards. The French public might be hoping the relationship doesn't become formal.