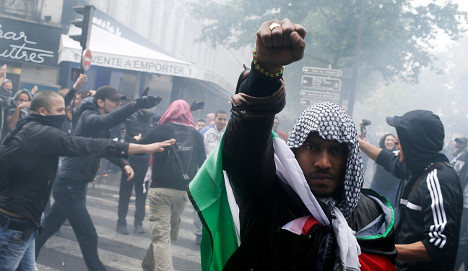 France's Jews are braced for violence after the latest Middle East flare up. Photo: Kenzo Tribouillard/AFP

The scene on Sunday of pro-Palestinian protesters laying siege to two Paris synagogues was a disquietingly familiar one for many in France's Jewish community.

Since 2000, France, which is home to the world’s third largest population of Jews, has repeatedly seen bursts of anti-Semitic behavior when violence kicks off between Palestinians and Israelis.

The current threat is real enough that President François Hollande said the country will “redouble vigilance” in the wake of Sunday's attacks that left two Jewish men injured. He was also to meet with the head of Jewish umbrella group CRIF on Tuesday.

“I do not want there to be any possible consequences in France,” Hollande said.

And as in previous incidents France’s nearly half-million strong Jewish community was braced for more anti-Semitic violence as Hamas rockets continued to strike Israel and Israeli bombs blasted the Gaza Strip, further inflaming passions on both sides of the conflict.

On Wednesday France's new Grand Rabbi Haïm Korsia called for mobilisation to fight anti-Semitism saying the notion of "vivre ensemble" (living together) in France was in jeopardy.

"The Israel-Palestinian conflict is a false pretext for a surge in hate, that already exists," Korsia told Le Parisien newspaper. But with the attack on the synagogue on Sunday, we passed a new milestone. We were on the brink of disaster.

"An elderly person told me it reminded him of Kristallnacht," Korsia said, referring to the infamous night in 1938 when Nazis attacked Jews across Germany and Austria.

Korsia said the French Republic must guarantee the weel-being of every citizen.

Leaders of other Jewish groups in France told The Local of the fear felt among their community.

“Today many French Jews are afraid of being subjected to attacks because in France, under the context of defending the Palestinian cause, there are those who go after people of the Jewish faith,” Sacha Reingewirtz, President of the French Jewish Student Union  told The Local. “French Jews serve as a stand-in for Israeli targets.”

In the weeks since the latest surge in Israeli-Palestinian violence, sparked by the killing of three Jewish teenagers, there has been a sudden increase in expressions of ant-Semitism and hatred towards Jews on social media sites in France, according to Jewish organisation CRIF.

“We are seeing a massive rise in extremely violent anti-Semitic statements online that we don’t usually see in ordinary times. There are many threats and there are many violent words on the internet,” Marc Knobel, head of studies at CRIF (the Representative Council of French Jewish Institutions) told The Local. “From the statements made online one can quickly proceed to violent words and finally violent acts.”

This worrying spiral towards violence comes at a time when the subject of growing anti-Semitism in France has made headline news around the world.

A recent, widely published study from the Anti-Defamation League (ADL) found that over a third of France’s population, some 18 million people, harbor anti-Semitic ideas of varying degrees. The study revealed France had the highest percentage of people holding anti-Semitic views in northern and western Europe.

Only Greece had more worrying stats, with the study saying 69 percent of Greeks were found to hold anti-Semitic attitudes of some sort, which put them top of the rankings for the whole Europe.

France’s strain of anti-Semitism draws its strength from various sources, including the persistence of negative stereotypes of Jews and the rise of the far-right National Front, whose founder Jean-Marie Le Pen has numerous convictions for hate speech. However the Israeli-Palestinian conflict has long been a motor for anti-Jewish feelings and violence for over a decade, Knobel said.

SEE ALSO: Anti-Semitism in France – Just how bad is it? (Flowers are laid at the scene of the murder of three Jewish children and a rabbi. Photo: AFP)

“I don’t want to say all of these acts are linked to the Arab-Israeli conflict, there are plenty of cases that involve other causes, but the conflict has left its mark on France,” said Knobel. “However, the anti-Semitic acts committed against French Jews are often related to the importation of the Israeli-Palestinian conflict.”

He traced the phenomenon back to 2000 when the killing of a Palestinian boy preceded a three-month period that saw 75 anti-Semitic attacks in France. Throughout the 1990s that number would have roughly been the amount seen in a whole year.

Since then the attacks have spiked during times of anger against Israelis, with the total for the last 14 years standing at nearly 8,000 anti-Semitic incidents, which Knobel said is a record high.

France is not alone in this phenomenon, Jews in the United Kingdom, Belgium and other countries have also felt an increase in attacks due to Middle Eastern conflict. But in France the sheer number of anti-Semitic incidents, including high-profile ones like the killing of three Jewish children and rabbi by self-proclaimed terrorist Mohamed Merah, make the situation in France more acute.

There is also the fact that there is strong support for Palestine among elements of France’s Muslim population, which at more than five million, is the largest in Europe.

However, Knobel says it’s not accurate to link the size of France’s Muslim population to anti-Semitism, noting the religious beliefs aren’t clear of those who engage in hate.

In recent weeks France has sought to remind the world that it cherishes and protects its diversity and has firmly rejected accusations it is anti-Semitic.

“France is not an anti-Semitic country. Yes, there are lingering prejudices against Jews – and isolated instances of hatred. But anti-Semitism is limited to a small (but still too large) portion of the population,” according to a recent opinion piece in the New York Times from Interior Minister Bernard Cazeneuve and Foreign Minister Laurent Fabius.

Members of the Jewish community will hope there are actions to follow his words.