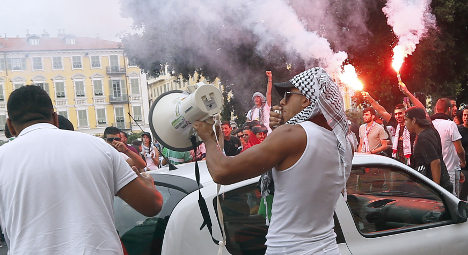 Protestors in the southern city of Nice demonstrate against Israel's bombardment of Gaza. Photo: Valery Hache/AFP

President François Hollande warned on Monday that he did not want to see "the Israeli-Palestinian conflict imported into France" after two Jewish men were hurt in clashes.

“I do not want there to be any possible consequences in France,” Hollande said.

The government has asked local authorities around the country to “redouble vigilance” the day after a clashes erupted at the end of a protest in support of Palestinians in Paris.

Several thousand demonstrators took to the streets on Sunday, with violence breaking out at the end of the march on Bastille Square as people threw projectiles onto a cordon of police who responded with tear gas.

The Jewish men were not badly hurt. Six policemen were also injured.

On Monday there were demonstrations in the cities of Lille and Nice where protestors expressed their anger at Israel’s ongoing bombardment of Gaza, despite local authorities banning any rallies.

In Nice there were cries of “Israel murderers, Hollande complicit” and “Gaza, we are all with you” as protesters, many draped in Palestinian flags took over the Place Garibaldi.

In his traditional Bastille Day television interview, Hollande said authorities would show a “zero-tolerance” towards any disturbances or intrusions into places of worship, whether synagogues, mosques, churches or temples.

“Anti-Semitism cannot arise because there’s a conflict between Israel and Palestine,” the president said.

France’s Interior Minister Bernard Cazeneuve said he had asked local authorities to ban demonstrations when there was any kind of risk of public disorder.

Joel Mergei, president of the Central Israeli Consistory – the top Jewis hreligious authority in France, said the violence represented a "new low" after an earlier petrol bomb attack on a synagogue in the suburb of St Denis.

In a statement France’s Union of Mosques said: “Nothing justifies any action that attacks our fellow Jewish citizens, their places of worship or institutions.

“Any such action is strongly condemned, morally unjust and unacceptable.”

France has the largest Jewish and Muslim communities in Europe, and there has been an marked upsurge in anti-Semitic attacks in recent years.