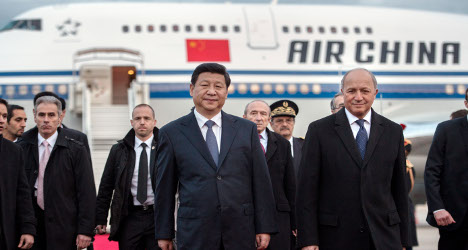 After all the reports of fearful Chinese visitors to Paris being targeted by petty criminals a new survey of international travellers from the Far East country has thrown up some surprising results.

Asked to name the country that showed the most hospitality to visitors the Chinese opted for Australia, followed by Singapore, but in third place came France, well ahead of other European countries like UK and Germany, who were down in 10th.

The survey carried out by Hotels.com comes despite the reputation that France can be a hostile place for some Chinese visitors.

Last year Beijing was forced to call on Paris to take steps to better protect its nationals after several high-profile reports of Chinese visitors being targeted by robbers.

At the time Chinese tourist guide Yang Shengu told AFP: "Paris is a dangerous city. Of course my clients are scared."

Earlier this year there were also reports that a team of Chinese police officers would also come to France this summer to help provide extra security for visitors from the country.

But if this week’s survey is anything to go by it seems most Chinese visitors to France encounter little trouble on their trips here.

Matt Walls of Hotels.com said: "Chinese travellers appear to be prioritising destinations that are most welcoming to them. In Europe we are seeing France win out against other countries as a result of its efforts to make it easier for Chinese people to visit.

"Until recently, the UK's visa processes have acted as a deterrent to many Chinese visitors due to their complexity."

France has made efforts to boost its image in the eyes of Chinese visitors and to make it easier for them to come to, recognising the value of tourism to the French economy.

Avid consumers of luxury goods, the Chinese are known for spending a lot of money when travelling abroad and often carry big sums of money on them, making them prime targets for criminals.

More than one million Chinese tourists visit France every year.

Earlier this year Foreign Minister Laurent Fabius even paid a visit to Charles de Gaulle airport to greet a passengers from Beijing off the plane. Although most did not recognise him.

Fabius will have been pleased to hear that, according to the survey, France is the destination in Europe that tops the wish-list of most Chinese travellers.

Although Australia was even more of a desired destination.