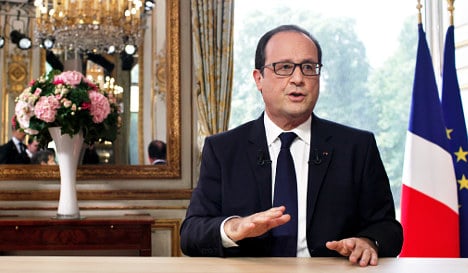 Speaking in a televised interview on France's national Bastille Day holiday after a military parade commemorating World War I, Hollande tried to persuade the country that his reforms were the right way forward despite opposition within his own ranks.

"There is a sort of illness which is not serious but can be contagious, where we are always deploring and denigrating. You have to be proud!" he said, referring to French people's well-known propensity to complain.

"When I'm abroad, people speak well of France… There are lots of entrepreneurs in our country who push forward France's assets, there are lots of big companies that are among the biggest exporters, there is lots of know-how."

His comments came hours after he presided over the annual Bastille Day military parade in Paris attended by soldiers from around 70 nations once involved in one way or another in World War I, including Britain, Japan and
Germany.

"This July 14th is not a July 14th like others," Hollande said on the eve of the parade, pointing out that nearly 100 years ago when the Great War kicked off, "soldiers from around the world" came "to save us".

Transport and fighter planes flew over the famed Champs Elysees avenue before the start of a ground parade that ended with young people from guest countries throwing doves into the air, as thousands of onlookers clapped.

But at a time when the eurozone's second-largest economy is still faltering more than two years after Hollande took power, all eyes were on the president's televised interview — an annual tradition on national day and his first media outing in over two months.

Acknowledging that economic recovery in France was "too weak, too hesitant, too vulnerable," Hollande pointed to a major reform plan being implemented as a step in the right direction.

The so-called Responsibility Pact offers businesses €40 billion ($54 billion) worth of cuts to heavy taxes and social benefit charges in exchange for a pledge to create some 500,000 jobs by 2017.

The plan aims to boost companies' competitiveness and much-needed employment, after a previous pledge by Hollande to curb growing joblessness by the end of 2013 failed. A record 3.38 million people in France are currently out of work.

But it has proved controversial with those on the left of the Socialist party, who claim big business is being handed tax breaks funded by cuts in public spending in areas such as health with no legal obligation to do anything in return.

In a bid to appease critics, Hollande on Monday pledged to cut taxes next year for "several hundred thousand" people and also to boost jobs for young people — one in four of whom are unemployed — by kick-starting apprenticeships.

But his comments failed to appease the opposition, with Luc Chatel, general secretary of the centre-right UMP party, accusing Hollande of being "disconnected from reality".

"Mr. Hollande seems to hesitate between denial and helplessness. Mr Hollande today gave the impression of only being a commentator of his own failures," he said.

Asked about allegations by former president and UMP member Nicolas Sarkozy that he was the victim of political interference after being charged with corruption and influence peddling, Hollande strenuously denied meddling in the justice system.

"I not only did not do it, but I couldn't even have thought about it as it goes so against the conception of democracy and also the spirit of my responsibility," he said.