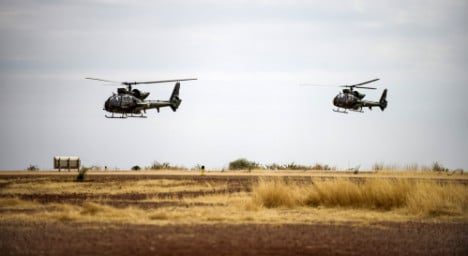 A file photo taken on January 28, 2013 shows French Gazelle military helicopters, flying back from the city of Timbuktu, arriving at the French army base camp airport in Sevare. AFP Photo/Fred Dufour

The so-called Serval offensive kicked off in January last year when French troops came to the help of Malian soldiers to stop Al-Qaeda-linked militants and Tuareg rebels from descending south of the sprawling country and advancing on the capital Bamako.

France had initially planned to put an end to Serval and redeploy troops to the Sahel region in May but a fresh bout of clashes between rebels and the army in the flashpoint northern town of Kidal forced Paris to delay the pull-out.

"The president wanted a reorganisation of our troops in the (Sahel) zone," Defence Minister Jean-Yves Le Drian said Sunday in a television interview.

The French-led Serval operation, which saw eight soldiers die in 18 months, has widely been deemed a success by the international community.

But Le Drian said concern had now shifted to the vast Sahel region, "to make sure there is no upsurge (in terrorism) as there are still major risks that jihadists will develop in the zone that goes from the Horn of Africa to Guinea-Bissau."

The new "counter-terrorism" operation, codenamed Barkhan, will kick off in the coming days and is being implemented in partnership with five countries — Mauritania, Mali, Burkina Faso, Niger and Chad — in the Sahel-Sahara region, Le Drian said.

He added some 3,000 French soldiers would be part of the operation, 1,000 of whom would stay in northern Mali and the rest would be deployed in the four other countries.

Drones, helicopters, fighter jets, armoured vehicles and transport planes would also be used as part of Operation Barkhan — the name of a crescent-shaped sand dune in the desert — which will have its headquarters in the Chadian capital N'Djamena.

"The aim is to prevent what I call the highway of all forms of traffics to become a place of permanent passage, where jihadist groups between Libya and the Atlantic Ocean can rebuild themselves, which would lead to serious consequences for our security," Le Drain said.

"It's our security which is at stake."