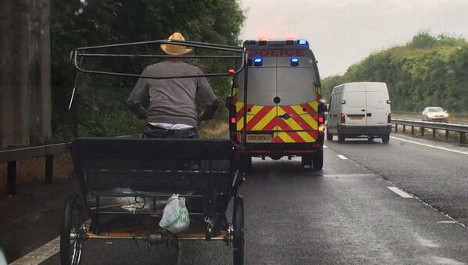 An unnamed Frenchman is escorted by British police after he ends up on a dual-carriageway after a wrong turn.Photo: Lewes Police

A Frenchman pedalling home from Britain on a rickshaw took a wrong turn onto a dual-carriageway and was stopped by police on Wednesday.

The rider, dressed in a straw hat and a grey sweater despite heavy rain, was apprehended near the town of Lewes in southern England.

"Police helping a lost French man… on his way to Paris on his Rickshaw," local police wrote on Twitter, with a photo of the man astride his three-wheeled cart.

Police helping a lost French man A27 #Lewes on his way to Paris on his Rickshaw. pic.twitter.com/Nog2yWD78F

Police escorted the rider to the end of the motorway, where he was able to join a cycle path to continue his journey via the port of Newhaven.

A police spokesman said: “At 1.45pm on Thursday July 10th a motorist told police that a man had been seen on the eastbound Lewes bypass, just east of the Kingston roundabout, pedalling a three-wheel trike.

"Local officers quickly found the man who was a French national seeking to return home via Newhaven."

He continued: "They advised him that it was dangerous to be on that stretch of road, especially during heavy rain, and escorted him safely to the other end of the bypass where he was able to take a safe cycle path connecting with the A26 to Newhaven and went on his way."

The unnamed Frenchman's unconvential form of transport had also caught the eye of a few other motorists in the area, who managed to capture him on camera.

@Lewes_Police Passed him on the A275 heading south just South of S Chailey. pic.twitter.com/qj5wc6FsHf