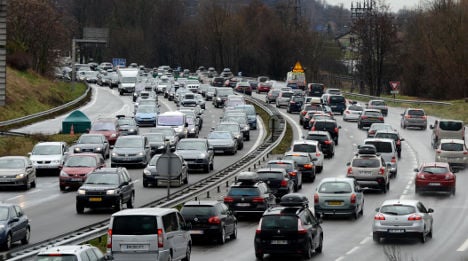 Driving might not be the best idea in France this weekend. Photo:AFP

French cities will see their first major exodus of the summer this weekend as holiday-makers leave in their droves in search of the sun. However le grand depart is likely to see road jams and dense traffic across the country.

With Monday July 14 – the annual Bastille Day  – being a public holiday in France, many inhabitants of the country’s big cities will take advantage of the long weekend, while others are heading off on their summer holidays.

National traffic watchdog Bison Futé has classed Friday as an orange level alert on the roads across most of France but in the Ile de France region around Paris, it has been put classed as a red alert for the roads heading out of the city.

Those leaving Paris to head south are likely to face the worst delays.

The watchdog advises against leaving Paris between 12pm and midnight on Friday if holidaymakers want to avoid the road chaos. Drivers are also advised to avoid the Rhône Valley between 2pm and 9pm as well as the A61 between Carcassonne and Narbone and the A10 between Orléans and Tours on Friday evening.

The situation on the roads looks set to get even worse on Saturday, with Bison Futé issuing a red alert for the whole country.

In terms of specific places to avoid the watchdog stearing clear of the A7 autoroute between Orange and Valence on Saturday afternoon as well as between Lyon and Valence.

Parisians are advised against leaving the city between 6pm and 2pm and stay off pretty much all the main highways leading out of the capital.

Monday has also been classed as an orange alert as people head back to the big cities.

The A13 autoroute between Normandy and Paris is set to be particularly busy, so drivers can expect delays.