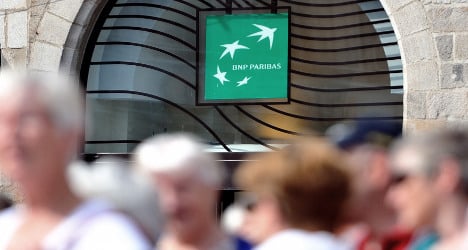 French and German leaders complained on Friday the US is trying to degrade European banks. Photo: Philippe Huguen/AFP

The United States is not playing fairly in its trade with Europe and is deliberately undermining Europe's banking system, the heads of German and French industry said in newspaper interviews Friday.

"It cannot be that America is weakening the European financial system and then buying up a bank here or there," the head of the powerful BDI industry federation Ulrich Grillo said in an interview published both in the German daily FAZ and the French newspaper Les Echos.

He called for a "clear regulation" in the banking sector and accused the US of seeking to "starve" European banks by slapping huge fines on them.

The US authorities are similarly investigating Germany's second-biggest bank Commerzbank on the same suspicions and the country's biggest lender Deutsche Bank has set aside billions of euros in provisions in case it is fined too.

"From a philosophical point of view, and from the point of view of the way the dollar and the euro are organised, I think there are some real questions which need to be asked, and quickly, to prevent a weakening of the European banking system," said the president of the French Medef federation, Pierre Gattaz.

But the French and German concerns are not solely about the banking system, but wider economic and trade relations as well.

Both Grillo and Gattaz said they take issue with the US tax system, which allows US companies to place money abroad without taxing it. Such a set-up enabled, for example, General Electric to build up substantial financial reserves, with which it was able to finance its bid for the energy business of French group Alstom, beating a rival bid from Siemens of Germany.

BDI chief Grillo said such a system allowed US companies to put 30-40 percent more money on the table.

"That's a very real distortion of competition and it's making life difficult for us," Grillo complained.

He added that he hoped international tax harmonisation would be discussed at a G20 level.