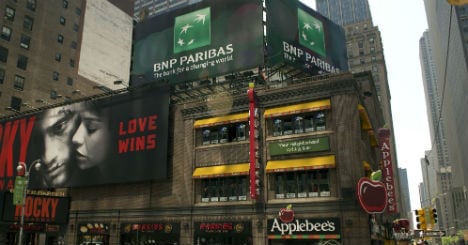 French bank BNP pleaded guilty on Wednesday to US charges that it breached sanctions imposed on Sudan and Iran. Photo: Don Emmert/AFP

US prosecutors say France's largest bank deliberately hid thousands of transactions with the two countries, as well as Myanmar and Cuba, between 2004 and 2012, in what officials called a "complex and pervasive scheme" that top bank managers knew broke US law.

The guilty plea was made after a nearly two-hour hearing before US District Judge Lorna Schofield, with the bank admitting it conspired to violate the International Emergency Economic Powers Act and the Trading with the Enemy Act.

The US Justice Department unveiled the record fine on June 30, when BNP agreed to admit its guilt.

Other major banks such as Credit Agricole, Deutsche Bank and UniCredit fear they could be next in the cross-hairs of the US authorities.

Schofield accepted the plea deal as "fair and appropriate" after questioning the bank's general counsel Georges Dirani at length to make sure BNP had not been forced into accepting the agreement.

In the United States, a judge must approve any agreement involving the authorities. Very few deals involving banks have been rejected in recent years.

A final hearing is set to take place on October 3 to discuss details about the sanctions.

And the bank is letting go of 13 employees, five of them top-level executives, including chief operating officer Georges Chodron de Courcel, who resigned in early June.