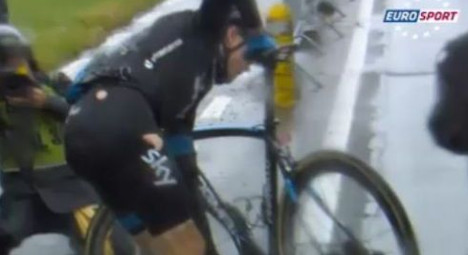 Chris Froome pictured here after falling from his bike. His shorts are split and he has a cut on his right leg. Froome later quit the tour. Photo: Eurosport

LATEST: Chris Froome is out of the 2014 Tour de France

Defending champion Chris Froome crashed out of the Tour de France on Wednesday after falling twice on a wet and treacherous stage five.

The second time, the 29-year-old was visibly injured and was seen shaking his head and holding his right arm before climbing into a Sky team car.

That signalled the end of his attempt to retain the yellow jersey he won in Paris last year.

Dutch rider Lars Boom won the brutal fifth stage of the Tour de France on Wednesday as Vincenzo Nibali of Italy strengthened his grip on the race leader's yellow jersey, but the major news of the day was the abandonment of Froome.

The last time a reigning champion had been forced to abandon the Tour was in 1980 when Frenchman Bernard Hinault quit due to a knee injury, although that wasn't from a crash.

In 1983, yellow jersey wearer Pascal Simon was forced out several days after a crash and he would never win the Grand Boucle. It topped off a nightmare two days for the Kenyan-born Briton who also came off his bike on Tuesday's fourth stage.

Television pictures missed his two falls on a day in which numerous riders crashed even before the feared cobbled sections began.

After his first fall, Froome was seen with ripped jersey and shorts down his right hand side, trying to fix a mechanical problem by the side of the road.

Blood and grazing could also be seen on his hip through a rip in his shorts.

His Sky teammates quickly dropped back to pace him back up to the peloton.

Already he had begun the day with a splint to protect his left wrist that was injured in Tuesday's crash.

But the second time he went down, along with a teammate, Froome looked visibly distressed.

He stood by the side of the road holding his right arm across his body and making no attempt to get up and ride on.

Absolutely Gutted for froomey and the whole team. Can't believe it. When he started shaking his head, it was clear his race was over and he was soon bundled into the safety of a team car.

Incredibly, on a stage where the seven cobbled sections totalling 13km had been the major concern for riders, Froome crashed out before they even reached the first.

His was one of a great number of falls as potential winners Alejandro Valverde and Tejay Van Garderen also went down before the cobbles.

That cost them dearly as they were caught behind a split in the main peloton from the first set of cobbles and forced to chase hard to get back in contact.

If the cobbles themselves weren't tricky enough, driving rain overnight and into Wednesday made them so dangerous that two of the original nine sections had to be removed from the course.

Yet still the conditions caused havoc.

He lost control on a bend and went down, causing two other riders to crash.

When he got up he had a noticeable rip in his shorts.

It was a bad day for sprinters such as Andre Greipel and Alexander Kristoff, the Norwegian who was second to Kittel on Tuesday's fourth stage, both came off their bikes.

Another German Tony Martin, who was part of a nine-man breakaway on the stage, also fell along with Janier Acevedo, whose crash cost him his place amongst the leaders and saw him swallowed by the peloton.

But the total number of fallers was impossible to count as riders were going down at almost every roundabout and bend.

This is from the BBC live blog:

"It's like the Tour de France has gone off-road. The conditions are appalling, the riders covered in mud as they splash through puddles or slip into the grass verges."

He was one of numerous riders to crash on the 152.km stage from Ypres, Belgium to Arenberg Porte du Hainaut, which includes seven cobbled sections totalling 13km.
Television pictures missed the fall itself but Froome was seen with ripped jersey and shorts down his right hand side trying to fix a mechanical problem by the side of the road.
Blood and grazing could also be seen on his hip through a rip in his shorts.
His Sky teammates quickly dropped back to pace the 29-year-old Briton back up to the peloton.
Froome was riding with a splint on the left wrist he injured in a crash on Tuesday.
Wednesday's fifth stage began in driving rain.
Two of the nine anticipated cobbled sections had to be removed because they were deemed too dangerous.
But Froome's crash happened 40 minutes into the stage on a straight bit of normal tarmac, a long distance before the peloton was due to hit the cobbles.
The treacherous conditions were causing havoc as numerous riders hit the deck.
One such was sprint king and three-stage winner Marcel Kittel around halfway through the day's racing.
He lost control on a bend and went down, causing two other riders to crash.
When he got up he had a noticeable rip in his shorts.
It was a bad day for sprinters as Andre Greipel and Alexander Kristoff, the Norwegian who was second to Kittel on Tuesday's fourth stage, both came off their bikes.
Another German Tony Martin, who was part of a nine-man breakaway on the stage, also fell along with Janier Acevedo, whose crash cost him his place amongst the leaders and saw him swallowed by the peloton.
We'll have the results of stage 5 as soon as the winner crosses the line

The run from Ypres, Belgium to Arenberg Porte du Hainaut was meant to include nine cobbled sections totalling 15.4km.

But there will now be two less and 2.4km fewer to ride over the bumpy roads.

"This morning with Jean-Francois Pescheux (the Paris-Roubaix director) we did the final reconnaissance," said Tour director Thierry Gouvenou.

"We found the route to be slippery, humid, but not very muddy. Even so, we decided to cut two sectors: Mons-en-Pevele, which is very difficult, very bumpy, and the one which carries Marc Madiot's name (at Beuvry-la-Foret) because it's under tress and there are a huge number of leaves which have made it very slippery.

"It's a question of common sense, we didn't want to throw the Tour de France peloton into these conditions, with the rain."

Heavy rain during the night, which continued into Wednesday morning and early afternoon, had increased the danger associated with riding over cobbles.

Teams were informed about the change, which has reduced the total distance by 3km to 152.5km but still leaves seven sections and 13.4km of cobbles, 90 minutes before the start of the stage.

While organisers may have removed the most dangerous sections, it will be scant relief for riders already nervous about the stage.

"(Wednesday) it's predicted to rain. We hope it won't because this can complicate everything," he said.

"It's going to be a nightmare, no-one's looking forward to it, especially if it rains," said Thomas.

"It's just going to be like riding on ice, especially with some of the corners on the cobbles. It will be last man standing I think."

Dutchman Lars Boom expects there to be a shake up in the overall standings at the end of the day.

"We can expect a true show," said the Belkin rider.

"It will be just as nervous as the first three days in Great Britain. The main thing is to hold a good position.

"The several cobblestone sections are far apart from each other, too bad if you ask me, but I think there will still be some time differences at the finish."

The last time the Tour passed through Paris-Roubaix's most notorious territory in 2010 it claimed several victims. 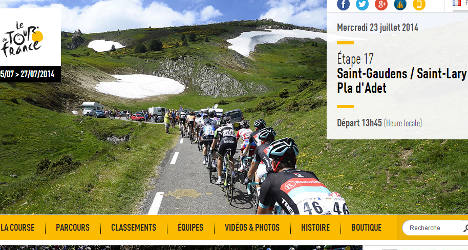 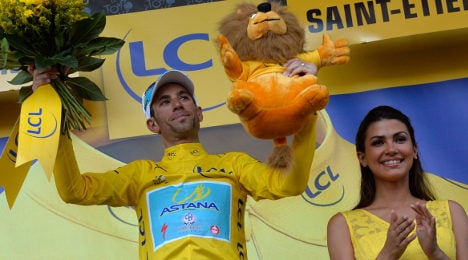 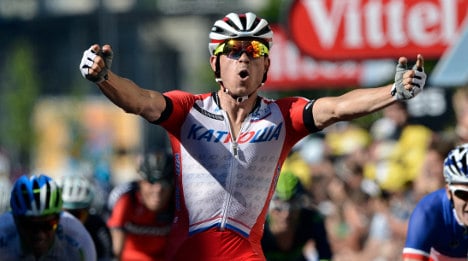