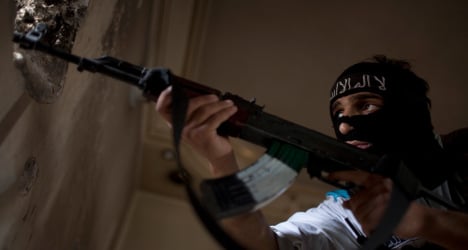 France is planning a crackdown on would-be jihadists. Photo: AFP

France on Wednesday presented a bill aimed at strengthening anti-terrorism laws to stop increasing numbers of aspiring jihadists from travelling to fight in Syria.

The new bill, presented by Interior Minister Bernard Cazeneuve to the council of ministers, came as a 48-year-old woman was charged under anti-terrorism laws after visiting Syria thrice where her son is fighting.

It includes a ban on foreign travel of up to six months for individuals suspected of being radicalised, and gives authorities powers to temporarily confiscate and invalidate their passports.

Airlines will be banned from carrying targeted passengers and will have to notify French authorities the moment one of them makes a reservation.

A Passenger Name Record – containing the itinerary for a certain passenger or group in a computer reservation system – will be given to European authorities to help identify such persons.

If the people targeted under the ban do manage to go abroad, they will be the subject of an international arrest warrant.

The proposed bill said the ban would be decided by the interior minister himself and could be extended as long as is necessary. It can apply both to adults and to minors.

Such a ban will be applied as soon as there is evidence "showing a desire to leave or engage in a terrorist plan," Cazeneuve said after leaving the meeting at the French presidential palace.

He described the bill as a "balanced text," adding: "100 percent precaution, that's what we are trying to achieve."

The French government is deeply concerned about the radicalisation of its nationals after hundreds of citizens have gone to fight with jihadists in Syria.

Authorities are concerned that those who come back will engage in deadly acts of violence like the shooting at the Brussels Jewish Museum in May that left four people dead.

Frenchman Medhi Nemmouche, who spent a year fighting in Syria, was arrested in connection with the incident.

In a separate case, they have also deported a Tunisian accused of recruiting young jihadists to fight in Syria.

The proposed bill also provides for tighter legislation against online recruitment, including asking Internet service providers to block access to sites "that provoke acts of terrorism or praise them" — modelled on existing rules against child pornography sites.

It will also allow investigators to use pseudonyms to enter pro-jihadist sites.

"I would like to block these sites," Cazeneuve said, adding that the Internet "can incite hatred and murder."

The law would also be tightened to make punish "lone wolves" who plan terrorist attacks on their own.

Current legislation targets those who associate with a group suspected of planning or staging terrorist acts.