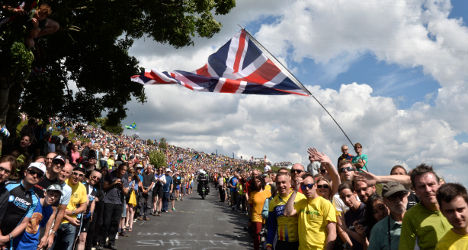 After three unforgettable days of riding through Yorkshire,  the south of England and London the Tour de France returns to French soil on Tuesday with the noise from the millions of spectators still ringing in the ears of the riders and those who were there.

The words “Ferveur Anglais” (English fervour) have appeared in headlines all over the French press in recent days with the sheer passion of the crowds leaving a mark on those who have followed the event for years.

TV commentators and online media alike have all been taken aback by the sheer enthusiasm for Le Tour shown by "Les Rosbifs", as Brits are affectionately known in France.

The Local spoke to two-time winner of the Tour de France, Bernard Thévenet, who now commentates on the event, to find out what it was like from a French perspective. (Bernard Thévenet, pictured now and back in the 1978 Tour de France. Photos:AFP)

How did you find the first three stages of Le Tour in Britain?

It was fantastic, incredible. I was surprised. I have never seen scenes like that before on the Tour de France. The sheer number of spectators was incredible. People compared the atmosphere to the legendary Alpe d’Huez climb in the Alps but there you only have big crowds spread over 12km. These last three days we have seen huge crowds spread over hundreds of kilometres.

In Yorkshire there were spots in the middle of nowhere that were packed. There were even spectators on the downhill sections and you never see that in France, because the riders pass too fast.

It was a great three days for the sport of cycling, not just for the Tour.

So the organisation went smoothly?

One thing that was good in the UK, was that they didn’t allow parking by the side of the route. The spectators had to park and walk two to three kilometres up to the route, whereas in France they often park on the roadside. I think the English might be more active than us French. But it was important because if there had been cars and the crowds, the riders would not have been able to make it through.

There seems to be more “fervour” for The Tour in the UK than France?

It’s still very popular in France but here everyone knows that every few years the Tour will come near where they live. They just have to wait for the next time. But in the UK the public knew it was a unique event and a one-off chance to see the Tour de France in their country, that’s why so many went. And remember that British riders have won the Tour for the last two years so it’s normal the British public have a certain passion for cycling now.

How could we see the same kind of fervour in France?

Well we have to find a Frenchman who can win the Tour de France. And that’s going to be complicated as it hasn’t happened since 1985. There two or three young riders who are capable of giving us hope in the future. The Tour has remained popular throughout the last 30 years, but if we find a Frenchman who is capable of finishing high up the general classification, then that would bring a lot more people out in support.

Will the atmosphere in France appear low key now?

Of course there will be less supporters on the roads, but actually the riders themselves may be glad of that. All the riders were happy about the crowds in the UK, but at times the amount of people meant they didn’t have much space in which to get through. Now it will certainly be safer for them and they might think they can find their rhythm a bit better if it is a bit calmer.

After the recent success, the British are now well and truly a part of the Tour de France?

It’s an incredible change. In my time there were maybe two to three British riders, but the sport has clearly taken off in the UK. What was great to see was that many of the spectators who lined the route on the hills of Yorkshire, had ridden up by bike.

How do the French feel about the dominance of the British Sky team?

It doesn’t scare me. It’s true that the Sky team does everything it can to win. They get the riders to their peak condition. It’s not their fault if the rest of the competition is not up to it. We appreciate their efforts to make sure they have the best team. Perhaps to new fans it seems like the same team is winning the Tour each year, but of course it’s not like that.

Should the Tour go abroad more often and for longer?

The Tour can start anywhere within reason but it needs to pass through the iconic places in France like the Alps and the Pyrennees and finish on the Champs-Elysées. Even Tokyo put in a bid to host the Grande Depart but unless they invent supersonic jets to get the riders back in three hours, then it’s not possible. The event needs to remain a sporting challenge. We cannot allow the race itself to become just a pretext. Of course hosting it in Tokyo would bring in more money but if we did that it would destroy the event itself. I would say five stages at the most could be held abroad. There is talk of starting the race in Budapest, and I think somewhere like that could be possible.