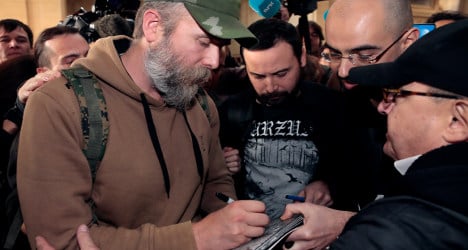 A Norwegian neo-Nazi was convicted of hate crimes in France. Photo: Jacques Demarthon/AFP

A French court Tuesday slapped a six-month suspended sentence and an €8,000 ($10,000) fine on a Norwegian heavy metal musician accused of inciting racial hatred in his blogs.

Kristian Vikernes, 41, was not present in court and neither was his lawyer as the verdict was delivered. He has denied posting racist blogs and said they were written by someone else.

Vikernes was arrested in July last year in France's central Correze region on suspicion of plotting terrorist attacks but was released after 48 hours due to lack of evidence.

He was however charged with inciting racial hatred and defending war crimes on his blog. Police allegedly found racist and anti-Semitic material on his computer as well.

Vikernes had told the court he was not the author of the blogs and said a possible misunderstanding could have arisen because he communicated through a Danish interpreter when he was briefly held in custody last year.

Ten excerpts from the blogs written between March and June 2013 that attack Muslims and Jews were presented as evidence in court.

The rocker, who adopted the name of Varg ("wolf" in Norwegian), first made front-page news in August 1993 when he killed a fellow musician in Norway.

Vikernes, who was also reportedly involved in arson attacks on churches, was sentenced to 21 years in prison for the murder. He was released after 16 and moved to Correze with his French wife soon after.

Vikernes told the court that according to Norwegian secret police there were "at any given moment 350 people pretending to be Varg Vikernes on Facebook", adding that "anybody can very easily put up a blog" that appeared to be one of his.