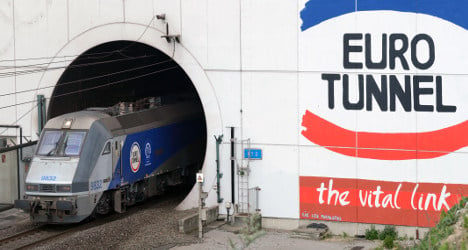 Eurotunnel and Eurostar trains hit by delays on Monday after a power failure. Photo: Denis Charlet/AFP
High-speed train company Eurostar said damage to overhead power cables due to the breakdown of a shuttle train on Monday was "unresolved and ongoing" and that four Tuesday services had been cancelled.
Repair work will continue until 0500 GMT on Tuesday, when the tunnel will partially reopen, said Eurostar, which runs passengers trains through the tunnel between London, Paris and Brussels.
A Eurotunnel car shuttle from Britain to France came to a halt at about 7:30 am (0630 GMT on Monday), about a quarter of the way through the 50-kilometre (30-mile) long tunnel, sparking major delays and cancellations on the car service and the Eurostar.
The 382 people and four dogs on board were transferred to the French terminal, where they should be reunited with their cars once their train can be moved.
The high-speed cross-Channel train service Eurostar cancelled four trains on Tuesday as a section of the track remained closed.
Eurostar also warned of delays of up to 60 minutes on other trains "due to an ongoing problem with the overhead power line in the Eurotunnel".
The cancelled trains were between London and Paris, London and Brussels, in both directions, scheduled between 7:31 am (0631 GMT) and 11:43 am (1043 GMT).
A spokesman for Eurotunnel said that a section of the track was still closed to commercial traffic following Monday's power failure.
That caused a train to stop about a quarter of the way through the 50-kilometre (30-mile) long tunnel, forcing the 382 people and four dogs on board to be evacuated.
The spokesman said the Eurotunnel car shuttle service was operating "normally", although the website suggested that passengers would have a waiting time of up to 90 minutes.
"We sincerely apologise for the inconvenience this will cause to your journey," the website statement said.
Late on Monday night a spokesman for Eurotunnel told The Local that repairs would be carried out throughout the night and that services should return to normal on Tuesday.
"There's a full investigation going on as it's a fairly major fault and not something that would happen on a regular basis. We want to know what the cause was and are looking into all the possibilities," the spokesman said.
The two companies have been advising passengers who don't need to travel urgently, to rearrange their journeys for another date.

Passengers being evacuated from a Eurotunnel train. Picture from @richardbyrom pic.twitter.com/HmHyIvsajB