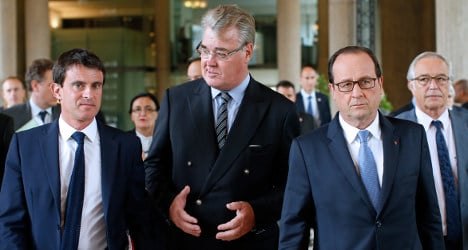 A summit aimed at creating half a million badly needed jobs in France got off to a rocky start on Monday, with two major labour organisations saying they would boycott the event.

President François Hollande opened the two-day conference, where he hopes to hammer out a deal to create more jobs to lower France's record unemployment in return for corporate tax and benefit cuts.

But his plans were dashed when the CGT and Force Ouvriere (FO) union federations said they would shun crucial talks scheduled for Tuesday, accusing Hollande of siding with employers.

The embattled French head of state has been trying to fine-tune his so-called Responsibility Pact, which offers businesses €40 billion ($54 billion) worth of cuts to taxes and social benefit charges in exchange for a pledge to create some 500,000 jobs by 2017.

Hollande urged companies "to join in the process urgently to achieve concrete results" saying the talks should not devolve into "perpetual one-upmanship with unilateral demands".

The summit comes against a backdrop of record unemployment in the eurozone's second-largest economy, where 3.38 million people are out of work.

The unions were angered by Prime Minister Manuel Valls's decision last week to defer a scheme to offer early retirement to those in physically demanding jobs, following complaints from leading employers union Medef that it was too costly.

Medef has also threatened to boycott the summit.

Union officials accused Valls of having contempt for workers and not consulting them before making key decisions.

FO chief Jean-Claude Mailly said on Monday there was a "fly in the ointment" in the dialogue, while CGT head Thierry Lepaon said Medef had "obtained what it wanted even before the start of the conference".

Lepaon said Vall's closing address due on Tuesday "does not merit our presence".

But the scheme is still woolly and it is yet to be worked out exactly how the government can force companies to create a specified number of jobs.

Adding to the government's problems, France's powerful unions have accused the government of failing to make employers keep their end of the bargain.

They are particularly incensed by Valls delaying the early retirement scheme for those in tough jobs under a new points system.

Under this scheme, people engaged in demanding jobs – working nights, exposed to loud noise or heavy loads or performing repetitive tasks – would gain extra training or early retirement as compensation.

The so-called "hardship accounts" were supposed to come into force in January 2015 but have now been delayed by a year, Valls announced last week.

The prime minister, while making the announcement, said "the ball is in the employees' court," further angering the unions, who viewed it as a capitulation to business.

Unions have dubbed the Responsibility Pact an "austerity pact" and accuse Valls of giving in to "blackmail" by big business.

Jean-Christophe Cambadelis, the first secretary of the Socialist party, appeared to side with the unions on Monday, saying the Medef was only interested in one thing: "To take the money and run."