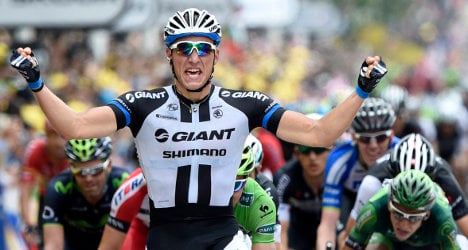 Marcel Kittel emphasized his status as the best sprinter in the world by winning Monday's third stage of the Tour de France in a bunch finish at Buckingham Palace, London.

The 26-year-old German won his second stage out of three at this year's Grand Boucle as he proved too strong for the competition down the final straight.

"It was awesome, I'm really happy I could win this stage in front of Buckingham Palace. There were amazing crowds, great scenery, the team did a really good job which was a great advertisement for our lead-out train," said Kittel.

Without former world champion and 25-time Tour stage winner Mark Cavendish for competition, Kittel looked in a class of his own.

"That's one big opponent that's not in the race anymore. Of course it changes things for me and also the team. We have to take it into account for the next few stages," said the German.

Cavendish crashed on the finish to the first stage in Harrogate on Saturday and dislocated his collarbone, withdrawing from the race before the start of Sunday's second stage from York.

Launched perfectly by his Giant-Shimano team, the battle behind Kittel was merely for his back wheel and the slipstream his huge frame provides.

Peter Sagan, who took second on the stage ahead of Australian Mark Renshaw, won that particular battle but never had the strength nor the belief to try and dive out from behind Kittel to go for the win.

Slovak Sagan at least held onto his green points jersey, though.

Kittel simply led home a procession, turning the final dash to the line into a demonstration of his pace and power.

Having suffered over Sunday's gruelling 201km hilly grind from York to Sheffield, the overall contenders took it easy through Monday's stage.

Race leader and yellow jersey wearer Vincenzo Nibali kept out of trouble while twice former winner Alberto Contador tested his legs in the final few kilometres by keeping near the front, more to stay away from potential danger than to try to finish high up.

He was wise to do so as there was a crash further back around 1.5km from the line.

Reigning champion Chris Froome was another to enjoy a fairly anonymous day, although the same could not be said for his Sky teammate David Lopez, who clipped a fan that had strayed too far out into the road to take a picture.

Lopez survived the incident but it created a concertina effect behind in the peloton which saw former winner Andy Schleck go down in a spill.

Frenchman Jean-Marc Bideau and Jan Barta of the Czech Republic were the escapees of the day, heading off straight from the start and lasting almost 150km in the lead.

On a day that was always a near certainty to end in a bunch sprint the 18 World Tour teams didn't bother to get involved in the breakaway, leaving two of the four invited teams to jump on the chance for some extended time in front of the television cameras.

They went close but Bideau gave up the ghost with 8km left and Barta battled on for another 2km before agonizingly succumbing to the inevitable.