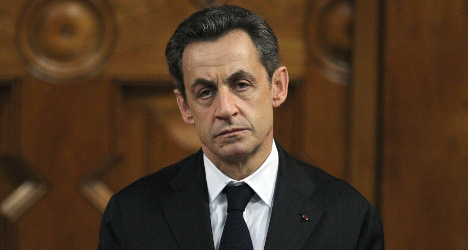 Nicolas Sarkozy was hit by another legal probe on Monday. Photo: AFP

Sarkozy, who was last week hit with charges including corruption and influence peddling in a case linked to his victorious 2007 campaign, is being investigated over whether financial penalties paid by his UMP party should have come out of his own pocket, judicial sources said.

The preliminary breach of trust case is the third to arise from the 2012 election battle and the subsequent refusal of France's electoral financing watchdog (CNCCFP) to validate Sarkozy's campaign accounts.

The CNCCFP ruled that Sarkozy had breached a €22.5-million ceiling on campaign spending and ordered him to repay both the 363,615 euros overspend and a 153,000 advance he had received from the state.

That ruling was upheld in July 2013 by the Constitutional Court, with the result that the UMP was barred from reclaiming €10.6 million of election expenses from the state.

That left the centre-right party facing bankruptcy but a fundraising drive led by Sarkozy ensured the debts, including the penalties inflicted on him personally, were cleared by September of that year.

The move was flagged up by the UMP's auditors when they approved the party's 2013 accounts at the end of last month.

The decision to open a preliminary investigation was made last week, just hours after Sarkozy was charged in connection with a suspected attempt to interfere in legal proceedings related to the alleged illicit funding of his 2007 campaign by France's richest woman.

Ten people are awaiting trial in that case while while a probe into allegations former Libyan dictator Moamer Kadhafi also provided secret funds for the 2007 campaign is ongoing.

Separately, examining magistrates are looking into whether the then-president Sarkozy misused public funds to stage a December 2011 meeting in the southern port of Toulon.

And last month they opened another investigation following the admission by public relations company Bygmalion that it passed off 10 million euros of work it had done for Sarkozy's election campaign as UMP party expenses in order to hide large-scale overspending.

Sarkozy vehemently denies wrongdoing in all of the cases he has been implicated in and has accused the ruling Socialist party of orchestrating a judicial witch-hunt designed to destroy his chances of making a political comeback in time for the 2017 campaign.