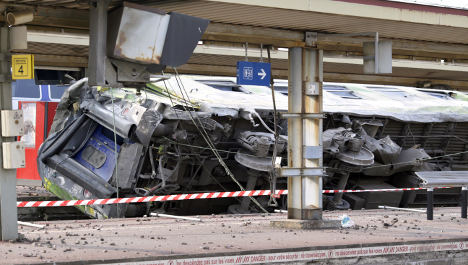 The deadly Bretigny trash was an accident waiting to happen according to a report into the disaster. Photo: Kenzo Tribouillard/AFP

The high-speed derailment of a French train that left seven people dead and dozens injured was an accident waiting to happen, experts investigating the July 2013 tragedy said on Monday.

But they also reported that inspections in the area of the crash near the station of Bretigny-sur-Orge, south of Paris, had revealed around 100 identifiable defects.

These included numerous joints that were either missing or too loose. Several of the faults had been known for up to about eight months prior to the accident without having been rectified. One crack in a metal piece had first been registered in 2008.

"The principal cause (of the accident) was a shortfall in the quality of maintenance," public prosecutor Eric Lallement told a press conference.

The Bretigny station was known to SNCF staff as a "risky zone" with "numerous gaps" in its maintenance procedures. But this awareness of what the experts termed "a state of disrepair never seen before" was not translated into action to remedy the situation.

Maintenance guides were incomprehensibly complex, the logging of faults was unreliable and systems for ensuring they were repaired were weak, the report said.

Had the Paris-Limoges 3657 InterCity train not derailed that day, it was virtually inevitable that one of the next few trains to pass through the station at high speed would have, the report concluded.

In view of the state of the tracks, the experts said it would be desirable to restrict trains approaching the station to a maximum speed of 100kmh (62.5mph). At the time of the accident, the train was travelling at 137 kmh, through an area with a speed limit of 150kmh.

The judges must now decide whether to initiate legal proceedings against RFF, the company which manages the track, or against the state train company SNCF.

A feeling of anger

"This new report is very worrying. I have a real feeling of anger," Jean-Robert Baroux, one of the survivors of the accident, told AFP.

Baroux, who escaped physical injury but describes himself as having been traumatised by the crash, added: "I would not want the maintenance service to be made the scapegoat for SNCF.

"The SNCF was aware from 2008 that there were problems but nothing was done. Were the maintenance workers qualified to sort these out?

"Did they have enough staff to do the repairs, did they have the means? Those are the questions I am asking myself."

Transport Minister Frederic Cuvillier had earlier admitted that France's rail network had become "extremely rundown" but insisted the problems that contributed to the Bretigny crash were being addressed through safety checks and a modernisation programme.

SNCF and RFF, who are due to be merged into a single state railway company, both contested the report's depiction of the state of the network when details of the report first leaked out on Sunday.

SNCF declined to comment on the prosecutor's comments on Monday, saying they had not yet seen the full report.

The first anniversary of the accident will be marked by a memorial service for the victims in Bretigny on Saturday.