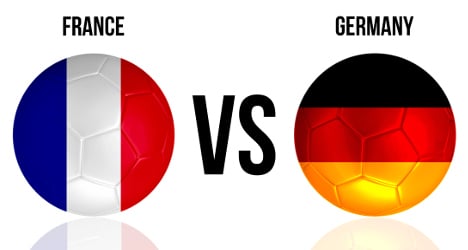 Who should us quasi-neutrals want to win? Photo: Shutterstock

France v Germany in the World Cup quarter finals is a mouth-watering clash. Naturally the French will back France and Germans will support Germany, but what about us quasi-neutrals out there? Who should we get behind?

The Local France invited The Local Germany editor Tom Bristow to take us on in a tête-a-tête as he tries to convince us of the merits of supporting Die Nationalmannschaft (Germany).

First up is Bristow:

Four years ago the French football team returned from the World Cup in South Africa in disgrace.

They failed to get out of the group stage, received a lecture from the sports minister, striker Nikolas Anelka was sent home early and players boycotted training. Do you want a country with this sort of attitude to play in the semi-finals of the World Cup?

In the four years since, German football has matured further. Its clubs are now stronger and its model for the sport – domestic clubs owned by fans with young talent being developed and given a chance in the national team – should be a global model.

Football brings Germans alive in a way it doesn’t with the French. It injects unusual levels of passion and excitement into them and a win on Friday will make all 80 million of them happy.

A French win, however, will be largely forgotten in France by Monday morning. They have cycling, rugby and fashion – Germany only has football.

If you prefer to base your choice of team on hard statistics rather than soft emotion, then Germany is also the side for you.

SEE ALSO: Ten reasons why Germany is better than France

No other team has lost in the World Cup finals as many times. They hold the record with four, and have also won the tournament three times, the last in 1990. In the past two tournaments Germany has come third. It’s time they were crowned champions and they deserve it.

France have won it once, in 1998 and got to the final in 2006. They normally prefer to go out in the second round or group stage, whereas Germany give it their all every time, even when they have little talent to work with (see the 2002 World Cup final team).

…and The Local France's editor Ben McPartland hits back: Look Germany, The French nation really could do with winning this match, so I think it’s better for the balance of power in Europe, if "Les Allemands" just took one for the team and let a few goals in, in the fabled Maracana stadium on Friday evening.

Until the World Cup kicked off and the goals started flying in, France was well and truly in the doldrums and has been for a long time. In fact France's Brazilian World Cup journey has been the most positive thing to happen to the country, well, since at least the invention of the baguette.

As the action in Brazil has continued, the so-called “collective-depression” that has inflicted France for months has gradually started to lift and we don't want it to return just yet.

If France get knocked out we’ll all have to start talking about the economy again and unemployment and deficits and Brussels.  And what about poor François Hollande, the press have left him alone for the last two weeks and he’s even seen a jump in his popularity ratings as Les Bleus have progressed in Brazil.

After a horrid two years in the job, Hollande deserves a few more days out of the limelight.

And besides all that, who wants the Germans to win again!? Full respect to the Nationalmannschaft, but after getting to the semi-finals for the last three World Cups, it’s time to let another team have a go.

And why not France. The players’ strike in South Africa four years ago is long forgotten and should be forgiven. Didier Deschamps' team are young, full of energy and hope and, importantly, they are united.

A win in this match for the new generation of the "black-blanc-beur" (the name given to France’s multi-cultural 1998 World Cup winning team) can help unite a nation (if only for a short while) that once again feels divided as the threat of the anti-immigration National Front looms large.

Finally it's time for revenge.

The classy French team of the 1980s featuring greats like Platini, Giresse, Tigana and co were knocked out by a workmanlike German team twice, in the semi-finals of two World Cups. The 1982 defeat on penalties has still not been avenged. It's never too late.

SEE ALSO: Ten reasons why France is better than Germany