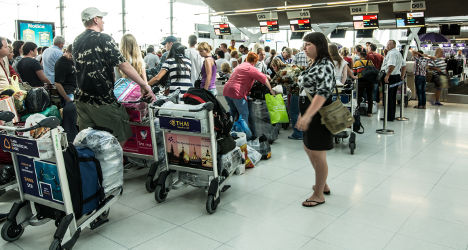 France on Friday said it is boosting passenger screening at its airports, responding to a request from Washington for extra security for US-bound flights over fears Islamist radicals could be plotting new attacks using hard-to-detect bombs.

Combined, an average 2.5 million passengers a day pass through the two airports.

French and British authorities urged passengers to allow extra time to get past the additional measures, which were not specified but were believed to focus on footwear and electronic items such as mobile phones and computers.

US officials on Wednesday publicly demanded enhanced security for airports in Europe and the Middle East which have direct US flights. They did not say whether they had intelligence about a specific plot, but their actions suggested alarm.

The request was "based on real-time intelligence", according to a US Homeland Security Department official, who spoke on condition of anonymity.

On Thursday, the US embassy in Uganda warned of a possible plot targeting Entebbe airport, that serves the capital Kampala, for later that day. But the danger period elapsed without incident.

France's aviation authorities said in a statement that its new security measures "will be carried out in a way to limit as much as possible inconvenience to passengers. However delays are possible."

The stepped-up screening is taking place at Charles de Gaulle airport — which has 47 US-bound flights a day at this time of the year — and other airports in mainland France, as well as in far-flung French territories such as Tahiti.

Officials recommended passengers catching flights to the United States get to the airport early to undergo the additional screening.

The added security will notably be felt at the Charles de Gaulle and Orly airports outside Paris, but also in Nice and Marseille in the south of France.

Western intelligence services are concerned that hundreds of Islamist radicals travelling from Europe to fight in the Middle East could pose a security risk on their return. Most European passport-holders do not need a visa to travel to the United States.

One of the radical organisations, Al-Qaeda in the Arabian Peninsula (AQAP), is of particular concern.

US and other intelligence services believe AQAP is passing on sophisticated bombmaking expertise to militants fighting in Syria for use against Western targets — most prominently, passenger aircraft.

"We have long-standing concern about terrorist groups trying to get undetected material onto planes," a US intelligence official told AFP.

AQAP "is always the group we think about when we talk about undetectable bombs," the official added.

Brooke Rogers, of the War Studies Department at King's College London, said that for extremist groups, bringing down an aircraft was the "ultimate prize. If the attackers succeed, it will be spectacular for them."

And "unfortunately in aviation, it doesn't take a big amount (of explosives) to make a boom," said US air security expert Jeff Price.

Although it implemented the additional security from Thursday, Britain was keeping its international terror threat level unchanged at substantial, the third highest grade out of five, where it has been since July 2011.

Passengers in Britain have long faced tight security measures at airports following high-profile threats, including a failed attempt by British "shoe bomber" Richard Reid to blow up a US-bound flight in 2001.

Experts say that if anyone could be behind the threat of a new generation of bombs, it was Ibrahim al-Asiri, a 32-year-old Saudi believed to be hiding with AQAP in Yemen's restive southern provinces.

The terror alert in Uganda further rattled nerves, but it was not immediately clear if it was linked to the airport security boost.

Airport security across the world was greatly reinforced in the wake of the September 11, 2001 attacks in the United States.

It was further tightened after the shoe-bomber plot, and when another attempt to blow up "liquid bombs" on transatlantic flights was uncovered in 2006.

A previous high-profile attempt by AQAP to blow up a US-bound plane failed on December 25, 2009, when Nigerian Umar Farouk Abdulmutallab tried to detonate explosives hidden in his underwear.

The Detroit "underwear bomber" is now serving a life sentence in the United States.