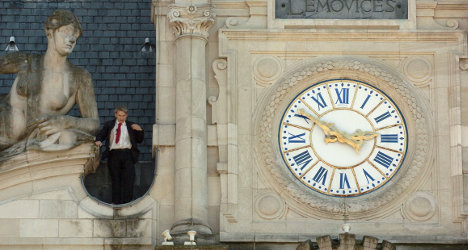 If you are fed up with jumping through ever numerous security hoops at airports the latest stunt from an eccentric French daredevil, who enjoys exposing security weaknesses will delight – or perhaps frighten you.

Hervé Couasnon, the self-styled “poet-climber”, named for his love of illicitly scaling buildings in artistic stunts, managed to board an Air France flight on Thursday at Charles de Gaulle airport without a ticket.

The 56-year-old former bus driver would have gotten away with it too, but the Rome-bound flight was packed so the rightful owner of his seat eventually showed up to claim his spot. That proved to be Couasnon’s undoing.

“I got through the security checks and boarding without a boarding pass or a ticket!,” he told AFP. “The goal was to show weaknesses in airport security.”

Coincidently, the stunt came the same day as new, tougher security procedures were announced for US-bound direct flights embarking from certain French airports. Because Couasnon tried to fly from Paris to Rome he may not have been subject to the additional security, which French authorities have so far refused to describe in detail.

Couasnon, who was clad in a business suit, took advantage of several blind spots to sneak aboard the flight. First, he flew into Charles de Gaulle aboard a flight from Bordeaux in western France.

He had a ticket and showed proper ID before getting on that flight, but once his plane landed in Paris he didn’t leave the terminal like the other passengers. He waited there for the flight to Rome, which meant he didn’t have to go through a security checkpoint.

Then Couasnon passed himself off as the aide for a person in a wheelchair who was pushed aboard the flight by an airline employee. It’s unclear if the person in the wheelchair was in on the stunt. (Couasnon atop a theatre at the Cannes Film Festival in 1989. Photo: AFP)

After being forced out of his seat by the rightful passenger he gave himself up peacefully to police.

It’s the latest in a string of high-profile security breaches that include scaling the U.S. Embassy in Paris and France’s National Assembly. In the latter incident he even managed to approach then-Prime Minister Jean-Pierre Raffarin in July 2002 and hand him a sport trophy.

In May 2012 he slipped past the security at a French nuclear power station. However, an incursion aboard a plane in Toulouse, where he tried to get into the cockpit to “transmit a message of peace” led to him being forcibly committed to a psychiatric hospital for a month.

It’s a “painful memory” for an “enthusiast of outsider art,” his lawyer Pierre Daniel-Lamazière told AFP at the time.