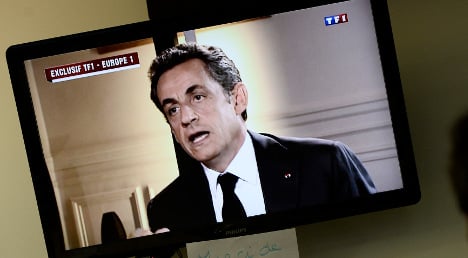 France's former president Nicolas Sarkozy hit back after being charged with corruption, denying he broke the law and suggesting his political enemies were interfering with the French justice system.

"I have never committed any act contrary to the values of the republic or the rule of law," Sarkozy said Wednesday after he was charged on three corruption-related counts that threaten to torpedo his hopes of a political comeback.

"I have never betrayed the confidence" of the French people, he said in a televised interview — his first major appearance since he lost the 2012 presidential election to Francois Hollande.

Sarkozy decried what he called "political interference" in the case – a suggestion that opponents like the ruling Socialists were behind his legal woes.

"In our country, which is the country of human rights and the rule of law, there are things that are being organised," Sarkozy said.

He also said there had been an "intention to humiliate" in judges ordering that he be taken into formal custody on Tuesday – an unprecedented move against a former French leader.

'No question' of quitting
Sarkozy was defiant when asked about his political future, saying: "There is no question of renouncing (politics) for me… When it comes to your country, you have duties."
THe ex-president said he would announce in late August or early September whether he planned to run for the leadership of his centre-right UMP party in the autumn – a potential springboard to retaking the presidency in 2017.
Sarkozy, 59, was hit Wednesday with charges including corruption and influence peddling after he was quizzed for 15 hours by judges investigating an alleged attempt to interfere in judicial proceedings in another case.
After the interrogation in a Paris police station, Sarkozy was put before a judge in the early hours of Wednesday.
The judge accepted the examining magistrates' request for the former president to be "mis en examen" – literally "put under investigation" – the nearest equivalent of being charged in the French legal system.
Sarkozy's longstanding lawyer Thierry Herzog and senior magistrate Gilbert Azibert were charged with the same offences.
After the hearing, Sarkozy was allowed to return to the Paris home he shares with his ex-supermodel wife Carla Bruni and their young daughter, but he can be recalled for questioning at any time.
The charges against Sarkozy carry a theoretical maximum prison term of 10 years, but legal experts regard custodial sentences in this case as unlikely.
Hollande said his predecessor must "benefit from the presumption of innocence", while Prime Minister Manuel Valls dismissed suggestions that the former president was being hounded by the Socialist government.
"It's not us who are asking these judges to launch investigations," Valls said.
And, apparently, the French public do not think Sarkozy has been mistreated.
According to a poll commissioned by the daily Le Parisien, taken during and after his 15 hours of questioning in custody, 63 percent of those surveyed think the former president has been handled like any other person facing and that he has not been treated unfavourably.
Investigators suspect Sarkozy tried to obtain information from Azibert about confidential proceedings in an illegal election campaign financing case being considered by one of France's highest courts, and that he was tipped off by a senior figure when judges tapped his phones last year.
Sarkozy has faced virtually non-stop legal battles since he left office.
He had been expected to attempt a political comeback in time for the next presidential poll in 2017, but those plans may now be wrecked.
Sarkozy had been widely predicted to stand for the leadership of the UMP in the first step of the comeback, but such a move would be tricky with charges hanging over him.
Even if the charges are eventually dropped, that is unlikely to happen for several months..