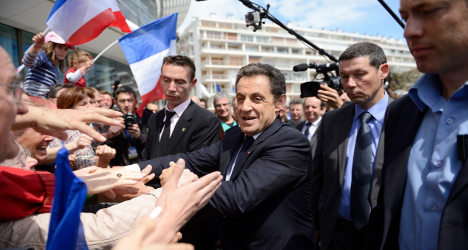 When Sarkozy took to the airwaves on Wednesday night to tell the French people he's innocent of the corruption charges brought against him, he called the case "politically" motivated and said he couldn't even consider quitting politics.

"There is no question of renouncing (politics) for me… When it comes to your country, you have duties,” he told reporters during the exclusive interview on TF1 and Europe 1 – Sarkozy’s first since losing the presidency to François Hollande in May 2012. His appearance was watched by some 9 million TV viewers, showing the former head of state is still a big draw in France.

He chose to fire back publicly over three corruption-related charges filed against him early on Wednesday that alleged he offered to pull some strings to line up a cushy job in Monaco for a high-placed magistrate in return for information about a probe into allegations he received millions of euros from deposed Libyan dictator Muammar Qaddafi to pay for his successful 2007 election campaign..

After two years of speculation about a comeback, France’s political class and media immediately began wondering aloud if this was finally the end for Sarkozy.

But don't be fooled. Sarkozy's proven ability to survive legal investigations combined with potential weaknesses in the case and a set of unique political circumstances in France mean, for now at least, Sarkozy's political career is not dead in the water yet.

“Politically, he showed he's back yesterday," author and expert on the French right Jean-Baptiste Marteau told The Local. "If the charges are dismissed it clears much more of a path for him. Sarkozy is definitely here for the moment. Will this scandal interrupt his ambitions? We shall see."

As Marteau says, only time will tell and anything can happen in French politics, but there are certain factors that stand in Sarkozy's favour.

Legal problems: The wiretaps that are the basis of the case and which allegedly catch Sarkozy conspiring with his lawyer to corrupt a judge, will face withering scrutiny. So far legal experts have noted they may violate attorney client privilege because they capture arguably secret conversations between Sarkozy and his counsel. Also other lawyers have noted the wiretaps are inadmissible in this case because they were collected in connection with a separate probe.

He's been here before: Just one year ago Sarkozy was in a similar position to now. He’d been charged with exploiting the mental frailty of France’s richest woman Liliane Bettencourt in order to obtain illegal funding for his 2007 presidential campaign. Just like now, those charges in March 2013 were considered to sound the death knell on his chances of a comeback. But when they were dropped in October last year and the case against him was dismissed, he bounced back. The path to the Elysée suddenly appeared clear once more. It could yet clear again if the latest corruption charges are dropped.

Record unpopularity for Hollande: One factor that continues to work in Sarkozy's favour, without him having to do anything, is the plummeting popularity rating of the man who stole the Elysée hot seat from him. President François Hollande's approval rating has hit an historic low in modern France, and with rising unemployment and a stagnant economy, Hollande has more than one undefended flank.

French voters also handed the Socialist government a so-called punishment vote in this year's local and European elections that benefitted both the right and perhaps more significantly the far right.

If Hollande doesn't stand in 2017 and it's not yet certain he will, any Socialist Party candidate, even the more popular Prime Minister Manuel Valls, will be tarnished by Hollande's record in power. Sarkozy's reputation on the other hand is slowly being enhanced with many conservatives seeing him as the only man who can stop the rise of the far right.

UMP Party leadership: The reaction from Sarkozy’s fellow UMP members was mixed on the news he’d been charged. Stalwarts like Brice Hortefeux backed him without reserve, while known enemies like former Prime Minister François Fillon noted meekly that Sarkozy was innocent until proven guilty. The fact his UMP party has been in utter disarray since the 2012 election, since the leadership election between Jean-François Copé and Fillon was hit by claims of fraud, has helped boost Sarkozy's standing as the only man powerful enough to unite the party. With Copé recently forced to quit as party leader following yet more allegations around campaign funding fraud, the UMP throne appears to be Sarkozy's for the taking.

Taking the leadership of the party in the election due to be held at the end of November has been seen as one of Sarkozy’s ways to reanimate his political life. For the moment he remains in the running although he has said he will make a decision at the end of summer, as to whether he will stand for the leadership. Even with charges hanging over his head, there would be nothing to stop him putting his name forward. If he decides against it, he still has plenty of time on his hands to position himself in time to become the UMP candidate for 2017.

Image: Two polls published on Thursday spelled bad news for Sarkozy. A poll for the Le Parisien newspaper carried out while Sarkozy was in police custody showed that 63 percent of the French people thought the ex-president was treated "as any average citizen" would be in the legal system, suggesting the public might not be buying his argument that there’s a politically motivated conspiracy against him.

Another, perhaps more worrying poll for Sarkozy was the BFM TV survey that showed 65 percent of voters were against Sarkozy trying to regain the presidency. However, 72 percent of supporters of Sarkozy's UMP party backed the return of the 59-year-old former head of state, the poll showed.

But things can change quickly in French politics and the public are a forgiving bunch when it comes to lawmakers. If a second set of charges against Sarkozy end up being dismissed it would provide ammo to his argument that the multiple probes against him are politically motivated and convince the public that he may after all be the victim. That would put him in a powerful position and may deter judges from bringing any more charges against him.

It's worth noting that only a couple of months ago polls in France suggested that if the 2012 presidential election took place now, then Sarkozy would beat Hollande in a run-off vote. That scenario may still yet come true in 2017.