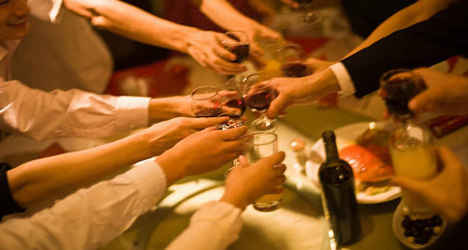 The traditional Gallic "pot" — a convivial office drinks party — may be a thing of the past after the French government on Thursday allowed employers to ban wine from the workplace.

The government had so far exempted wine and cider from the list of alcoholic drinks that employers could ban in offices.

But after a decree published in the official government journal on Thursday, wine has now been added to the list of alcoholic drinks the government says could "threaten the security and the physical and mental well-being of workers".

SEE ALSO: Pigs to UFOs: The most bizarre laws in France

The labour ministry, which is behind the directive, said "alcohol is the biggest psycho-active substance consumed in France".

Alcohol abuse causes around 49,000 deaths in France annually, according to a study by the Institut Gustave-Roussy, one of the world's leading cancer research institutes.

Drinking wine has long been a mainstay of French gastronomic culture but consumption has declined in recent years as drinkers turn increasingly to beer.

In 2013 the United States outstripped France as the top global consumer of wine, with 29 million hectolitres being drunk, one million more than in France.

SEE ALSO: What drives expats mad about working in France