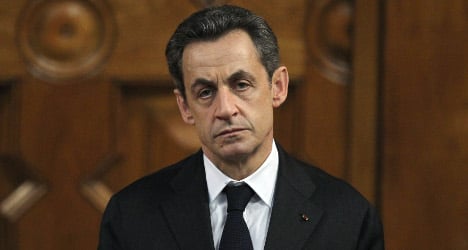 Have Sarkozy's chances of making a comeback been scuppered once andd for all? Photo: Valery Hache/AFP

It was not the sort of history he was planning to make.

Nicolas Sarkozy has spent the last six months fine-tuning his plans to become the first man to have won, lost and then reclaimed the presidency of France.

Instead, the one-time "bling-bling" president with the supermodel wife once again finds his comeback hopes suspended as he attempts to wriggle free of a web of inter connected corruption scandals.

The worst case scenario envisaged by his closest advisors appears to be coming true. For a long time they have accepted that only the court could provide an obstacle to him making a comeback in 2017.

"Sarkozy has to wait for these legal cases to be solved. What his advisors fear most is that cases will run on and on and will not be decided before the elections," political author Neila Latrous told The Local last year.

SEE ALSO – Only a court can stop a Sarkozy comeback The latest of these has landed him in police custody, with the 59-year-old achieving the unhappy distinction of becoming the first former president to be detained for questioning in a criminal probe when he turned up at a Paris police station on Tuesday morning.

By early Wednesday after 15 hours of questioning, he was charged with corruption and influence peddling – serious crimes which if convicted could result in up to 10 years in prison.

Investigators suspect him of illegal interference in a probe into allegations his 2007 election campaign was partly financed by illicit donations from Libya's former dictator Muammar Gaddafi.

Sarkozy has been preparing for a return to the political frontline in September, when it is anticipated he will reclaim the leadership of the UMP, France's main centre-right political party.

His allies say his legal travails, which they ascribe to pressure from the ruling Socialists, will only make the single-minded son of a Hungarian immigrant all the more determined.

"The more they go after him, the more that gives him the will to fight. Wait and see, he will come back stronger than ever," says a close political ally.

Speaking after the charges were brought several of the ex-president's former allies told French media that the Sarkozy's comeback is very much on, despite his legal battle to clear his name.

"This indictment will be like an engine for him, it will stengthen his determination," one ally told Europe 1 radio.

He added that we can expect  Sarkozy to make a statement in the autumn about "what he wants to do for his country".

Proof of Sarkozy's willingness to come out fighting was seen on Wednesday when he announced he will speak to the nation on TV on Wednesday night in a pre-recorded interview.

Sarkozy has been here before. Last year he was charged with taking advantage of France's richest woman when she was too frail to know what she was doing, in a case that centres on cash-stuffed envelopes allegedly being passed to UMP officials.

When the charge was finally dropped in October, his path back to power appeared to have been cleared.

Two years after he walked out of the Elysee Palace vowing never to return, polls made him one of the country's most popular politicians and comfortably the centre-right's best chance for reclaiming the presidency in 2017.

Nine months later, the outlook is not quite as rosy.

The drip-drip negative impact of being constantly linked to corruption cases appears to have chipped away at his standing with voters on the right of the political spectrum.

"He has gone from 66 to 50 percent support as the best presidential candidate," says Jean-Daniel Levy of the Harris Interactive polling agency.

"It is true he is still at the top of the list but (former prime minister) Alain Juppe is close on his heels now and is looking like someone who can both unite the right and attack the left."

After his humiliating 2012 defeat by Francois Hollande, Sarkozy largely shunned the limelight, concentrating instead on making money on the international conference circuit.

But he has been unable to resist the lure of a return to the cut and thrust of political life.

Sarkozy has always been something of an outsider in the staid world of French politics.

The son of a Hungarian aristocrat who arrived penniless in France, Nicolas Sarkozy de Nagy-Bosca burst onto the political scene as a town mayor at 28, an MP at 34 and minister at 38.

He won the presidency at only 52 and was initially seen as a much-needed breath of dynamism, making a splash on the international scene and wooing the corporate world.

He married Bruni in 2008 and the two had a daughter, Giulia, a few months before the 2012 election.

His so-called "bling-bling" style – the seeds of which were laid with a champagne-soaked election night party at a glitzy Champs Elysees restaurant – provoked outrage as job losses mounted.

Hollande, a mild-mannered Socialist party apparatchik, seemed the perfect antidote two years ago but has since run into the same problems that Sarkozy encountered when trying to revive or reform the French economy.

The next election is there for the taking – but Sarkozy's hopes of having at shot at it could be wrecked if he cannot escape this second set of charges.