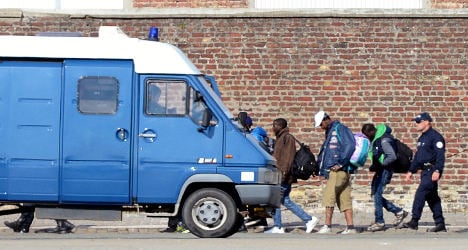 Citing poor sanitation and concerns over the prolonged duration of the main migrant camp in Calais, riot police moved in early Wednesday with tear gas and evicted some 320 people who had set up home there in between attempts to smuggle themselves into the United Kingdom.

Around 250 migrants were taking refuge inside a squat at the Channel port, that doubles as a feeding centre run by local charities, when officers encircled the building around 6:30am. Three hours later police had cleared out that building as well as the 70 some migrants living in three other squats, AFP reported.

Local Prefect Denis Robin said each of the migrants will each get an administrative hearing on their situation with decisions made on a "case by case basis." Some migrants were to be taken to detention centres, while other would be placed in shelter for asylum seekers.

A witness described the chaotic scenes that unraveled as officers moved in.

"I was inside when the cops arrived, they blocked all the exits and used tear gas to keep people from escaping," a charity volunteer Celine, who provided only her first name, told BFMTV. "People were sleeping, they didn't have the time to get out."

The operation was authorized by a court in nearby Lille after Calais authorities argued the camp, which had been operating since May, didn't have adequate sanitation facilities and was on its way to becoming a long-term shelter, which the city opposed.

After the raid riot police used 15 buses to carry away the migrants, who now face the prospect of being deported to their home countries. Local humanitarian groups said many of the migrants are from war-torn countries like Afghanistan, Sudan, Syria and Iraq.

"Twenty or so women and roughly 10 children were sleeping at the site in last couple days," Christian Salomé from charity group Auberge des Migrants told reporters. "The migrants come from countries that are at war. It's very bad that all this happened out of the public eye."

This confrontation comes just over a month after riot police cleared 650 migrants out of makeshift camps that had sprung up around Calais. While local authorities noted some of the camps, which were hit by a scabies outbreak, presented a risk to its inhabitants, humanitarian groups argued the raids deprived the migrants of their only shelter.

The war in Syria and political instability in other nations like Egypt have sent a rush of people to Calais, where the migrants wait for a chance to smuggle themselves to Britain. Three thousand arrived in the first five months of 2014, compared with 300 during the same period the prior year.

The migrants are drawn across the English Channel by a hopes of a more generous refugee programme and a chance to reunite with family members already living there.

Humanitarian groups said the cycle of allowing camps to grow and then violent eviction by police must end, because it's clear the migrants aren't going to stop coming.

“We have to take into account the reality of the situation and this zone is a part of a circuit for people seeking asylum in Britain. It’s not going to stop tomorrow,” said Jean-Claude Mas, secretary general of immigration support group La Cimade told The Local previously. “Instead of discouraging people who have nothing to lose, and who are willing to do anything to make the crossing at Calais, why not get organized?”