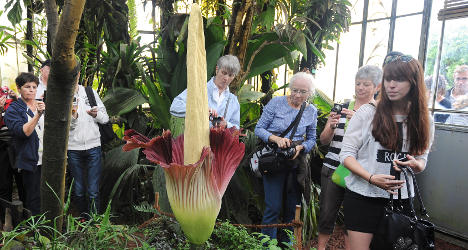 “Titan’s Penis”, officially known as Amorphophallus Titanum, is normally only in bloom for between 24 and 48 hours before it wilts, and it flowers only once a decade, hence the long queue of visitors to the Jardin Des Plantes in Nantes.

The phallus-shaped flower began flowering on Sunday, since when over 2,000 have flocked past the giant plant, also known as the corpse flower or stinky plant due to its odor.

"Titan’s Penis" is the biggest flower in the world, and can reach heights of up to three metres. The one in Nantes, wasn’t quite as big, measuring only 1.6 metres.

The plant, endemic to western Sumatra, is held in many botanical gardens and the Nantes facility acquired one in 2012.

“It is a pretty flower, well-designed, well-structured,” said one of the visitors, Christian Hamon.

Anyone who is desperate to set eyes on the plant should head straight to Copenhagen in Denmark, where there is a "Titan's Penis" all set to bloom.