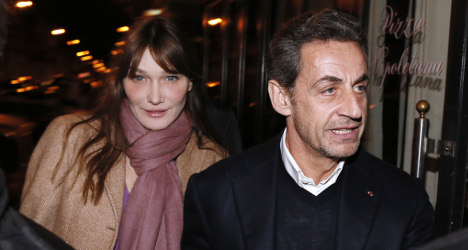 Sarkozy was being questioned by investigators at a police station in Nanterre, just outside Paris, as authorities try to establish whether the ex-President, with the help of his lawyer Thierry Herzog, attempted to pervert the course of justice in a case with the potential to land the country's former leader in jail.

Anti-corruption investigators can hold Sarkozy for questioning for up to 24 hours, with a possible extension of another day.

Sarkozy arrived at the police station at Nanterre just before 8am after investigators had issued a summons on Monday. The move is unprecedented for a former head of state.

("Nicolas Sarkozy arrives at the head of the Police Judiciare at Nanterre to be interogated. A first for an ex-President," tweeted Guillaume Biet.

Investigators suspect Sarkozy, 59, sought to obtain inside information from one of the magistrates about the progress of another probe and that he was tipped off that his mobile phone had been tapped by judges looking into the alleged financing of his 2007 election campaign by former Libyan dictator Muammar Gaddafi.

Reacting to the news that Sarkozy had been detained, French government spokesman Stephane Le Foll said the ex-president was a “litigant like any other person”.

“The justice system is investigating and they will do everything necessary,” Le Foll added.

Several UMP deputies have rallied to the defence of their former leader with Julian Dray insisting that being “detained is not proof of guilt.”

“This is an opportunity for him to be heard about the details of the case. There was a need for Sarkozy to explain himself, so the investigators can understand his role,” Dray added.

Monday's detention of Herzog and the two magistrates was seen as a step towards Sarkozy himself being taken into custody for questioning and potentially charged – a move that would be devastating for his hopes of a political comeback in time for the next presidential campaign in 2017.

Under French law, suspects in criminal cases can be held in custody for up to 48 hours before they must be charged or released.

SEE ALSO: Only a court can stop a Sarkozy comeback Sarkozy is alleged to have been helped to victory in 2007 with up to €50 million ($70 million at the time) provided by Gaddafi and envelopes stuffed with cash from France's richest woman, L'Oreal heiress Liliane Bettencourt.

He dismisses the Gaddafi claims as ridiculous and was cleared last year of taking Bettencourt's money when she was too frail to know what she was doing.

His campaign treasurer is one of ten people awaiting trial in that case.

The Gaddafi investigation is ongoing. It was in connection with it that the judges last year obtained the unprecedented authorization to tap the phones of a former president.

After four fruitless months they discovered Sarkozy had a secret phone registered under an assumed name and it was conversations with Herzog recorded on that device that triggered the investigation.

Leaked excerpts suggest Sarkozy got a friendly judge to try to influence the outcome of confidential legal deliberations related to the Bettencourt case in return for support securing a lucrative post in Monaco.

They also imply he had a mole in a senior position who tipped him off about a planned police raid on his offices.

Sarkozy has attacked the tapping of his phones as worthy of East Germany's notorious Stasi secret police. The authorization of recordings of lawyer-client conversations has also provoked misgivings within sections of France's legal establishment.

Separately, Sarkozy has recently been linked to a scandal over the funding of his campaign for re-election in 2012.

The leader of his UMP party resigned last month after it emerged that €10 million ($13.6 million) spent in support of Sarkozy had been fraudulently passed off as party expenses.

Sarkozy denies any knowledge or involvement in the falsification of bills for organizing campaign rallies and other events. A criminal investigation into that case was opened last week.

Authorities are also investigating claims that, once in office, Sarkozy rigged a dispute settlement procedure which resulted in disgraced tycoon Bernard Tapie receiving €400 million from the government.

The Tapie payout, it is alleged, was organised in return for political support in 2007.

Sarkozy has been implicated in a number of other scandals which are still being investigated.

The most serious of these centres on an allegation that he helped organize kickbacks from a Pakistani arms deal to finance the 1995 presidential campaign of former premier Edouard Balladur.

He is also being probed over allegations that, while president, he used public funds to pay for party political research and handed out contracts for polling to a political crony.