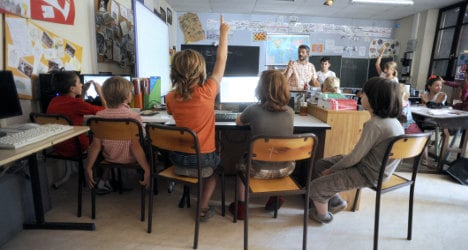 In the latest policy U-turn for embattled President François Hollande’s government, two top French ministers announced this week a pilot programme to teach school children about gender equality will be ditched and replaced by a watered-down, optional initiative.

The initiative gives teachers total autonomy over, if and how, to broach the issue of gender equality in their classrooms.

The government's original programe, named "ABCD's of Equality"  had provoked ire among conservatives and right wing groups, who claimed it was an attempt by the government to teach children that their gender was not determined by birth but can be flexible.

The Socialist government insisted it was simply teaching equality and respect between boys and girls from a young age.

After the climbdown it was equal rights groups who were up in arms over the U-turn.

“We have a leftist government that gives in to the pressure and the misinformation of its opponents, who are reactionary and conservative”, spokeswoman Pauline Arrighi told The Local. “The government has racked up U-turns, demonstrated a lack of political courage and engaged in betrayals that have pushed people either not to vote or turn toward other parties.”

The initiative unveiled on Monday pales in comparison to ABCD de l’Egalité (ABCD’s of Equality), a pilot program launched in January in 275 test schools that put gender equality lessons on the curriculum along with maths and reading for 600 volunteer teachers. France had planned to roll the plan out in all the country’s schools in the coming academic year if it proved to be a success.

But conservative activists, who’ve been engaged in an ongoing battle with Hollande ever since gay marriage was legalized in May 2013, got wind of the program and whipped up a fear campaign to pressurise lawmakers.

In a France where conservatives are still angry by the violent opposition to gay marriage, the equality curriculum then became fodder in a national argument about traditional morals and French identity.

Editorial writers conscious of the programme's role in the national culture debate also lined up this week's to bash the government’s U-turn.

A writer in leftist French daily Liberation said she had to pinch herself to believe it was real.

“Given the symbolic weight of this case, an about face could considerably weaken the government,” wrote journalist Alexandra Schwartzbond. “That a few narrow minds could convince the government to backpedal does not bode well for the future.”

“Long live the convergence of the lifeblood of the nation which is fighting to save the modesty and integrity of children,” she wrote in a release.