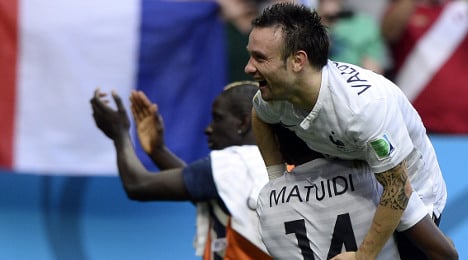 By beating Nigeria on Monday France coach Didier Deschamps admitted that his team had met its objectives that were set before the tournament began.

But now with a quarter-final clash to come against neighbours Germany, Deschamps and his players are having to set new targets.

"We had objectives, which went up after each match – reach the last 16, finish top (of the group). Today it was to reach the quarter-finals.

"From what we've been through, to be here among the last eight shows something. But we won't get carried away.

"I'm very proud of the players. But the adversity will increase. It's another step and we'll do everything to climb that,” Deschamps said.

After the hard-fought win over Nigeria, which came thorough two late goals, Deschamps’ players are eager to experience that winning feeling again.

“We are satisfied to have qualified but we want more. We don’t want to stop there,” said the right-back Mathieu Debuchy.

His teammate Mathieu Valbuena echoed those thoughts. “The World Cup is not yet a success [for France]. We always want more. I’m not going to hide that.

“We want to go to the end and win the WorldCup. But there’s no delusion. The closer we get,the more complicated it will be.”

Valbuena is correct on that point. The reality is, France have yet to be really tested in this World Cup. Their strolled through their opening two group games against Honduras and Switzerland, before their goalless draw with Ecuador with qualification having already been almost guaranteed.

Although the quarter-final with Nigeria proved more difficult than many had predicted, the Super Eagles did not represent the kind of stern test that the Germans will provide.

But Les Bleus will take hope and perhaps inspiration from seeing how Algeria rattled the Germans in their own quarter-final on Monday night.

Algeria took Germany to extra time before goals from Andre Schurrle and Mesut Ozil killed off the resistance from the Desert Foxes.

Germany coach Joachim Loew admits that his team will have to improve when they play France in the Maracana stadium on Friday.

"We must be better for the match against the French," admitted the 54-year-old Germany head coach.

The Maracana clash will be a mouth-watering showdown between two of European football's powerhouses.

It stirs memories of the 1982 World Cup semi-final which finished in adramatic 3-3 draw before West Germany went through after their 5-4 win in the penalty shoot-out.

"I wouldn't want to talk about France-Germany in 1982, but those have always been dramatic classics between the team," said Loew.

"Didier Deschamps has turned them around since 2010, they have good playerslike (Karim) Benzema and (Olivier) Giroud who can decide games on their own.

"We're looking forward to another classic."

That 1982 clash is etched into footballing folklore thanks to the collision between German goalkeeper Harald Schumacher and French substitute Patrick Battiston, who had to be stretchered from the field.

The collision left him with two teeth knocked out, three cracked ribs, and damaged vertebrae. Battiston didn’t regain consciousness for 30 minutes and eventually slipped into a coma.

The incident still appears in lists of the World Cup's most shocking moments.

See the video for yourself.

The omens may be with Les Bleus. France have never been knocked out of a quarter-final of the World Cup.

Didier Deschamps at least has history on his side.