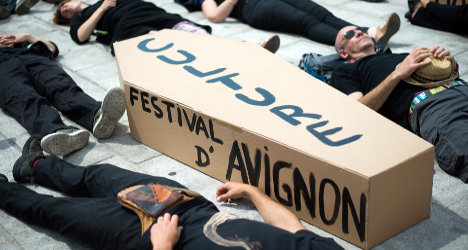 France's world famous theatre festival in Avignon is set to open under the cloud of a performers' strike. Photo: AFP

France's top theatre festival in the southern city of Avignon will open as planned on Friday, though it could still be disrupted by a strike from performers that has hit other cultural events in France.

About 80 percent of festival staff voted on Tuesday for the opening to go ahead as planned, a spokeswoman for the festival workers said.

"We want this festival… to be a loudspeaker for the demands of precarious" performers and arts workers, the spokeswoman said. Of 350 workers directly associated with the festival, 309 voted late Monday with about 80 percent wanting it to go ahead as scheduled.

Though that number does not include the scores of performers at Avignon and who have promised to strike. The CGT-Spectacle union has called for a "massive strike" on the opening day of the Avignon festival, in line with other recent job action by arts workers protesting changes to their benefit system.

The CGT strike warning covers the entire month of July, which is essentially the duration of the festival.

The festival staff, who voted to not completely shut down the technical side of the show by striking, have planned to meet again for a vote on Thursday. At that meeting they will decide what sort of action they plan to take on the opening day of the festival.

The protest has hit events in Paris and several other cities and led to cancellations.

Under French law some 250,000 workers in the film, theatre, television and festival industry benefit from a system that compensates them for periods when they do not work, in a bid to address their chronic job insecurity.

But many are unhappy with a deal reached between some unions, employers and the government in March to try to save money on this loss-making welfare regime. The agreement would increase their payroll taxes, among other changes.

“In the long term if you have fewer people available to make a living out of their art, their talent, then it’s going to be harder to have a broad cultural offering," he said.

"Right now you’ve got so many small companies that are able to irrigate the entire country with plays, with music. There is very vibrant culture scene even in the midst of the economic downturn," he said. "It's simply a way to allow people to survive."