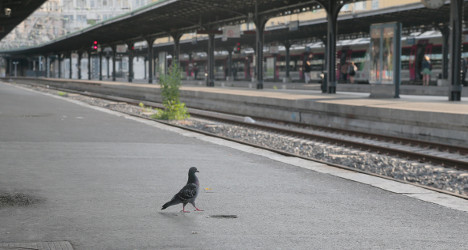 As Parisians gradually flee the capital for France’s beaches and countryside, Paris's transport authorities are preparing to take advantage of the lull in passengers to make progress on a series of major projects.

But that of course means sections of train, tram and subway lines will be partially or fully closed down while the work gets done. So for people who commute into and around the city, the next couple months could be a real headache.

It could also be a real hassle for public transport-dependent tourists who need the trains and Metro to get to some of the City of Light's most famous monuments.

SNCF chief for the Paris region Bénédicte Tilloy, says the aim to improve public transport reliability by the time everyone returns after the summer holidays.

"The aim is obviously to improve the regularity of the service. One third of the delays on the transport network are due to problems with the reliability of the infrastructure," Tilloy told Le Parisien. "By addressing the sources of these irregularities we hope to improve the services by September."

But to help you plan ahead for the travel trouble, The Local has collected details, with the help of Le Parisian newspaper, on some of the main closures.

Here are some lines to avoid this summer:

Metro line six: From now until the end of August line six will be shut down between busy Montparnasse and the Trocadero metro station (popular Eiffel Tower viewing point). It’s part of a project to strengthen a viaduct that supports the tracks in that area.

Tram line T1: Works that begin this week will mean into traffic on line T1 being cut off between La Courneuve and Bobigny until July 20th in order to renovate two switching stations.

Cergy-Prefecture station: The busy station, which includes a high-speed TGV stop, will be completely shut down from July 14th to August 29th. In conjunction with the closure the number of RER A trains passing through at peak hours will also be reduced.

Transilien Line L: From July 1st to August 1st traffic on Transilien line L will be cut off between the Saint Lazare station in Paris and Saint Cloud-Marly Le Roi from 9am-5pm, Monday to Friday. That is sure to be a serious disruption for commuters coming from Paris’s wealthy western suburbs.

RER C: The line will be shut down from July 15 to August 23rd between the Gare d’Austerlitz and Invalides stations. Because the disruption is occurring in the centre of Paris it could mean a serious inconvenience for people trying to pass through the city on RER C, which goes out to the Château de Versailles.