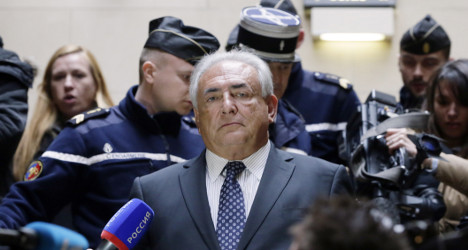 A convicted pimp will have to change the name of his DSK sex club after losing a court case. Photo: AFP

A Belgian court on Monday barred a renowned pimp from naming his latest venture "DSK",  the initials of disgraced former IMF chief Dominique Strauss Kahn who filed the suit.

The pimp, Dominique Alderweireld or "Dodo la Saumure", is linked to sex parties attended by Strauss-Kahn and dubbed his latest brothel DSKlub, in an admitted reference to the scandal-hit politician.

The court decided in favour of Strauss-Kahn, a potential presidential contender in the 2012 French election whose chances were dashed by a New York sex scandal involving a hotel maid.

Strauss-Kahn is well known by his initials DSK in France and neighbouring French-speaking countries such as Belgium and Switzerland.

Alderweireld chose the acronym for the new brothel "Dodo Sex Klub" which opened this year in the town of Blaton, near the French border in Belgium where prostitution and brothel ownership are legal.

French-born Alderweireld is accused of aggravated pimping and supplying prostitutes to Strauss-Kahn — a charge he denies.

Strauss-Kahn's lawyers said they were suing the 64-year-old pimp for deliberately choosing a name that "reproduces his (Strauss-Kahn's) initials which identify him to all."

Alderweireld had earlier told AFP that the name of the establishment was "commercially brilliant… as everybody talks about DSK".

Strauss-Kahn was forced to resign as head of the International Monetary Fund following his 2011 arrest for an alleged sexual assault on a New York hotel maid.

Criminal charges in the case were dropped and at the end of 2012, Strauss-Kahn settled a civil suit brought by the maid by paying her undisclosed damages, which reportedly exceeded €1.1 million ($1.5 million).

Alderweireld has said he plans to open another sex establishment in Belgium called the Carlton, the name of a posh hotel in the northern French city of Lille where Strauss-Kahn attended sex parties.

Last August, a French judge sent Strauss-Kahn and 12 others — including Alderweireld — to trial on charges of aggravated pimping as part of an organised gang. A ruling is expected sometime this year.

Saumure, meaning brine, is the salt oil that fish in this part of Europe are often served in, especially mackerel — the French slang for pimp.