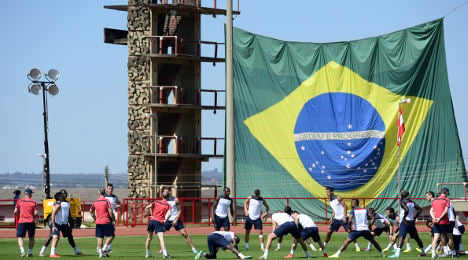 France's team train in Brasilia on the eve of their FIFA 2014 World Cup last 16 match against Nigeria. Photo: Franck Fife/AFP

The Arsenal striker got the nod over Antoine Griezmann, while Mathieu Valbuena was also drafted into the French front line after being rested for Wednesday's 0-0 draw with Ecuador.

Nigeria coach Stephen Keshi made only one change to his team, with Chelsea winger Victor Moses replacing Michel Babatunde, who fractured his wrist in Wednesday's 3-2 defeat by Argentina.

Peter Odemwingie was expected to play in a central role in support of lone striker Emmanuel Emenike, with Moses and Ahmed Musa — who scored twice against Argentina — starting on the flanks.

The omens are good for Les Bleus when they take on Nigeria in Brasilia, in the last 16 of the World Cup on Monday. Up for grabs is a place in the quarter-finals against Algeria or Germany.

Never before has France been knocked-out in the last 16 or quarter finals of a World Cup. Whenever they have made it out of the group they have always progressed to at least the semi-finals.

Didier Deschamps and the increasingly expectant France fans, who are falling back in love with a team who disgraced themselves by going on strike four years ago, would no doubt settle for a similar achievement at Brazil 2014.

But first his side must overcome an unpredictable Nigeria side, who on their day seem capable of causing an upset, as they showed in the final group match against Argentina, when the Super Eagles gave the South Americans a fright before going down 3-2.

Deschamps insists that he is concentrating on getting Karim Benzema, and the rest of the potent force that scored eight goals in Group E, ready to face the African champions.

Several players were rested for the Ecuador group game, when France wereheld to a 0-0 draw.

But Didier Deschamps is likely to start with the team that beat Switzerland 5-2 in the second group game, which means Olivier Giroud will partner Benzema in attack.

Mathieu Valbuena should also return but the only change from the team that faced the Swiss could see Laurent Koscielny lining up incentral defence alongside Raphael Varane, as Mamadou Sakho is doubtful due to a thigh injury.

Yohan Cabaye will return after missing the Ecuador game due to suspension,but Paul Pogba's place is under threat from Moussa Sissoko.

France were disappointing in their nil-nil draw with Ecuador, but before that they had impressed against Honduras and Switzerland in particular.

That 5-2 win against the Swiss sparked talk of France being dark horses for the World Cup, but they have yet to be tested by a real force in the competition, to warrant any talk of lifting the trophy yet.

Nigeria, who are not the Super Eagles of the 1990s when they impressed at USA 94 and France 98, are unlikely to provide the test by which France’s ambitions can really be gauged.

However there is always the danger that the French could be over-confident and take the African side too lightly.

Deschamps however insists he will not allow any complacency and any thought of who may await the French if they get through to the quarter finals has been banned.

“My only concern is Nigeria and the last 16 and to ensure the players are prepared for the battle tomorrow,” Deschamps told Le Progres on the eve of the match. “It is useless to think beyond that.”

One factor that could work against his team will be the conditions. The match is being played at 1pm local time, meaning the temperature down on the pitch is expected to hit the low 30s.

Deshcamps admits the Nigerians will have more experience of playing in such conditions.

The heat and the humidity "can have an influence over your rhythm," he said. "We need to learn how to handle certain situations."

For his part Nigeria coach Stephen Keshi insists that his side's dispute over bonuses ishistory now that their cash has been paid, and they are now concentrating on reaching the quarter-finals for the first time.

CSKA Moscow winger Ahmed Musa, who scored twice in the 3-2 defeat by Argentina, said: "We need to defend well, take our chances up front and learn from the Argentina game."