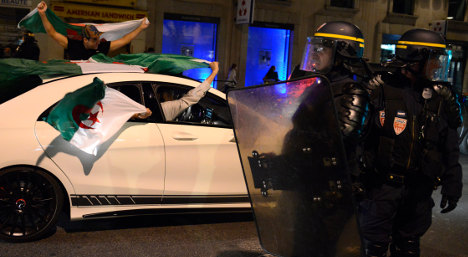 The French city of Nice has banned foreign flags on Monday ahead of the World Cup clash between Algeria and Germany. Photo: Jean-Philippe Ksiazek/AFP

Christian Estrosi, the right-wing mayor of Nice, issued a decree temporarily banning what he termed the "ostentatious display of foreign flags" in the centre of the Riviera city, which is home to many people of Algerian heritage.

"Since the start of the World Cup we have sadly seen intolerable behaviour that severely disrupts public peace," Estrosi added. He said the ban would remain in force until the end of the tournament.

Some celebrations of Algeria's historic qualification for the second round of the World Cup spilled over into violence on Thursday with more than 70 people arrested for rioting or looting across France.

That was more than double the 30-odd arrested on June 22 after Algeria's win over South Korea.

Hundreds of Police Authorities said they would deploy hundreds of extra police in Paris, Lyon, Lille and several other cities ahead of Monday's match.

“In those places where there has already been some serious incidents there will be an operation in place designed to maintain order as well as make arrests," a spokesman for the ministry of interior told BFM TV.

“It’s necessary not just to re-stablish order, but to bring those who have caused the trouble to justice," he added.

There will be a heavy police presence on the famous Champs-Elysées avenue in Paris, the traditional scene of celebrations.

There'll also be around 300 extra police on the streets of Marseille and around 500 in the city of Lyon. Security wil also be tight around the northern town of Roubaix where traffic will be banned from certain areas and a police helicopter will be used to keep track of any troublemakers.

The police operation to keep the peace is believed to be bigger than that employed on Bastille July 14, or New Year’s Eve.

Authorities in Paris have erected a big screen at the Hôtel de Ville  to broadcast the France – Nigeria match, but because of security fears the Algeria match will not be shown on the giant screen.

A spokesman for the Town Hall told The Local the decision was taken by the city's police chiefs.

Germany lost their two previous matches against Algeria – 2-1 at the 1982 World Cup and 2-0 in a 1964 friendly. The winner of Monday's game will play France or Nigeria in the quarter-finals in Rio de Janeiro on Friday.

The incidents prompted far-right leader Marine Le Pen to call for dual nationality to be revoked on the ground that the fervent support for Algeria reflected a failure to integrate into French society.

Algerians make up France's largest immigrant group, with close to two million people able to trace their roots back to the former colony.

Many hold dual citizenship and attachment to Algeria appears as strong amongst the French-born younger generation as it is amongst older immigrants.

"We are asking everyone to stay calm while celebrating a victory," government minister Harlem Desir said on Monday.

"We must not let unruliness spoil what should be a party," he told the LCI television channel, adding that adequate security measures had been put in place to pre-empt a repetition of last week's incidents.

Desir slammed Le Pen's comments as an "attempt to play one off against the other," and said the trouble-makers were a minority and not representative of the community.

"I would like to see that we do not mix up little groups and the majority who conduct themselves in a peaceful manner," he said.

"Now we must put a stop to dual nationality," she told a talkshow broadcast on French television and radio.

"There is not another country in the world that would accept what we go through on our territory," she said.

Le Pen led her party to first place in May European elections with 25 percent of the vote in France and the National Front also did better than expected in local polls in March.

French group SOS Racisme said it was "as dangerous as it is concerning" for Le Pen to use isolated incidents to support the National Front's agenda.